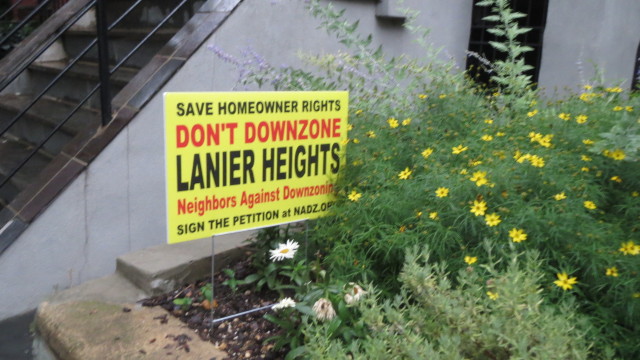 On Tuesday, you published a message from NADZ, a group that opposes an initiative by a group of resident in Lanier Heights to rezone the rowhouses there from an R-5-B designation to an R-4 designation. ANC1C has not yet taken a position on the initiative, and accordingly, we look forward to eventually hearing the views of the affected neighbors, whether for or against. We were disappointed, however, to see NADZ make a number of inaccurate representations concerning our process in the message that you published.

By way of correction, ANC1C did not hold a meeting on Wednesday night. Rather, our Planning, Zoning, and Transportation Committee held a meeting on Wednesday night. The Committee held its meeting on the thirdWednesday of the month at the Kalorama Recreation Center. which is the same night, and the same location, where the Committee has held nearly all of its meetings for many, many years. The location has nothing to do with the Kalorama Citizens Association. All of our Committees hold their meetings at this location because it is one of the few spaces in Adams Morgan that are owned by the District of Columbia government where our Committees can meet without having to pay a fee. And the inclusion of the item the Committee’s agenda was not for the purposes of having the ANC take a position on the matter. Rather, the Committee invited staff from the Office of Planning to explain to the community and to the Commission how a re-zoning proposal would be handled by the District government bodies that have responsibility for such matters, and what ANC1C’s role in such a process would be.

We hope that all Adams Morgan residents who are interested in the Lanier rezoning issue will participate fully in the process as it unfolds. We also hope that all parties will refrain from mis-characterizing ANC1C’s actions.

Read more →
More Stories
Quite the Transformation at 17th and Rhode Island Ave, NWNext Up in Oktoberfest Parties – Brookland Pint