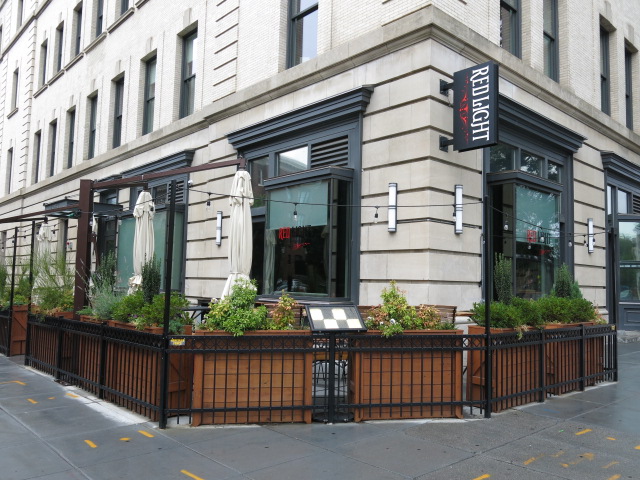 “Partners Aaron Gordon, Robert Underwood, and brothers Ari and Micah Wilder are pleased to announce the appointment of Jonny Fellman as the new Beverage Director and Master Drinksmith at Red Light Cocktails & Dessert Bar. In his new role, Fellman will be responsible for enhancing the cocktail program adding new libations to the menu each season. Fellman’s latest collection of cocktails not to be missed include the Magdalene, gin, elderflower liquor and lemon; the Tijuana Twister, jalapeño tequila, watermelon, lime and honey; Just Peachy, made from a combination of vodka, peach liqueur, lemon, prosecco, as well as the Coal Miner, rye whiskey, sweet vermouth, Sambuca and angostura bitters. These new libations are priced at $12 each. Additionally, Chef Underwood has added an assortment of bar treats, rustic flatbreads, and a Toast ‘Crostini’ Bar to the restaurants new savory menu, which will pair well with Fellman’s latest offerings.

A native of Pawling, New York, Fellman moved to the DC area in 2000 to attend George Mason University. In 2004, Fellman graduated, and began working as a facilities manager for a small community center in southeast DC. In 2009, Fellman decided to enter the restaurant industry. He worked he way up the ranks at the cocktail-heavy gastropub AGAINN, starting as a barback and quickly moving up the ladder to become head bartender. Then, in 2012, he was tapped to serve as head bartender at the Quill at The Jefferson, Washington, DC where he spent two years honing his skills in craft cocktails. In 2014, Jonny traveled across the pond to act as a beverage consultant for a friend’s new pub in London. He spent six months traveling overseas before returning to the US for his new role at Red Light.

At Red Light, Chef Robert Underwood has added a collection of bar treats, rustic flatbreads, and a Toast ‘Crostini’ Bar to the new menu. New bar snacks include a Cheese Board, four cheeses served with marinated figs and honey walnuts for $16; a Charcuterie Board, four charcuterie items served with whole grain mustard, cornichon and baguette for $15, and Elevated Bar Nuts with nori seasoning for $5. New rustic flatbreads include the Margherita, tomato, mozzarella and basil for $10; Fig &Chocolate, figs, chocolate, hazelnut, gorgonzola and mascarpone cheese for $12; Wild Mushroom, mushrooms, tallegio cheese, and white truffle oil for $12; Potato & Pancetta, pesto, potato, pancetta and fontina cheese for $11, and Prosciutto, prosciutto and arugula for $11. Items from the new Toast “Crostini’ Bar include Infused Butters with white truffle, pistachio and fig for $7; Duck Confit with melted tallegio cheese, vegetables and herbs for $8; Brussels Sprouts with crispy pancetta and mustard oil for $8; White Bean with carrots, celery, onion and herbs for $7; Beets with pistachios and pistachio butter for $8, as well as Cauliflower with capers and olive for $6.”