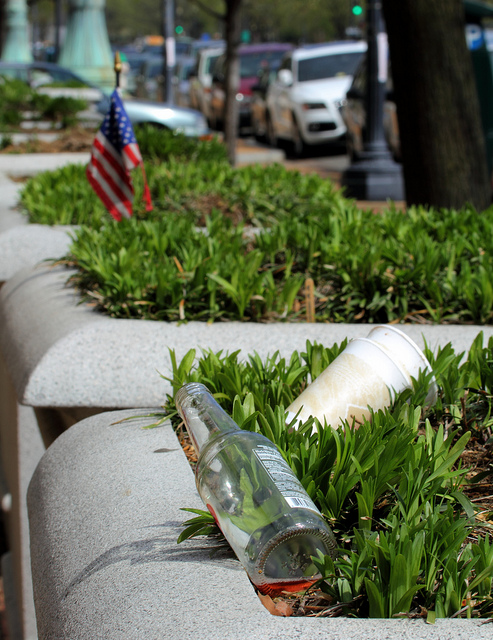 “On August 1, 2014, the Metropolitan Police Department (MPD) launched citywide enforcement of the District of Columbia’s anti-littering laws, expanding it from a pilot program used in the Fourth and Sixth Police Districts, and allowing officers to issue $75 Notices of Violation (NOV) to any pedestrian observed littering.

Throughout the month of August, MPD officers will issue only warnings to violators in the First, Second, Third, Fifth, and Seventh Districts, as the Department works with community partners to educate the public about littering enforcement. Officers in the Fourth and Sixth Districts will continue to issue actual tickets.

Beginning Monday, September 1, 2014, anyone in the District of Columbia violating the littering law may be issued a $75 ticket.

If an officer sees a person dropping waste material of any kind on public space, in waterways, or on someone else’s private property, the person may receive a $75 NOV for littering. Anyone issued the NOV is required to provide their accurate name and address to the officer. Those who refuse or fail to provide their accurate name and address can be arrested and, upon conviction, be fined an additional $100 to $250 by the D.C. Superior Court. Failure to respond to a littering ticket by either paying the fine or appealing the ticket to the Office of Administrative Hearings will result in a doubling of the fine.

MPD officers will continue to issue $100 traffic tickets to the driver of any vehicle where an officer observes either the driver or any passenger toss trash of any kind onto someone else’s private property or onto any public space, such as streets, alleys, or sidewalks.”