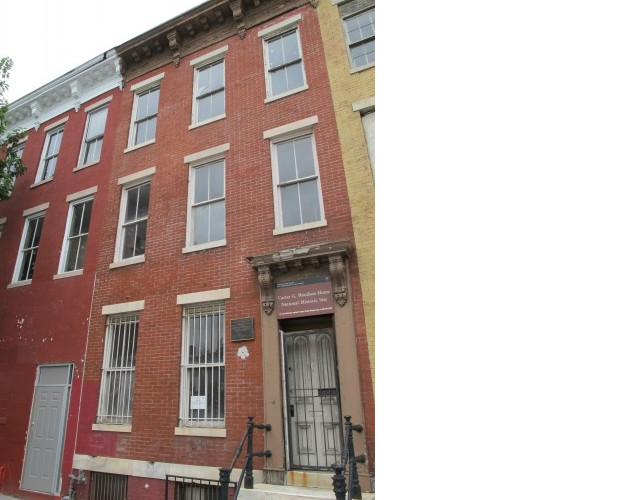 “Congresswoman Eleanor Holmes Norton (D-DC) said today she expects the historic Carter G. Woodson Home to be completed by August 2015 with federal funds she requested, and that a National Park Service (NPS) partnership with a non-profit organization (NPO) will complete the two adjoining homes. This is the first-ever National Park Service (NPS) historic site to be completed through a private-public partnership. She expects a local NPO familiar with the Shaw neighborhood, where the house is located and skilled at raising funds, will serve as a vehicle for bringing tax-exempt funds forward. Because Dr. Carter G. Woodson’s work was fundamental to the creation of Black history as a serious academic discipline, work that was responsible for the annual designation of Black History Month, Norton believes that the approximately $9.5 million necessary to complete the entire project is achievable. Once the project is completed, the main home, where Woodson lived, and the adjacent homes, which will be used to facilitate tourism, will together be considered the “Carter G. Woodson National Historic Site.”

Norton requested that President Obama include $3.2 million for the first phase of the project in his fiscal year 2014 budget. After the President put the funds in his budget, Norton wrote to House and Senate appropriators to request that they would fully fund the President’s request. As a result of the full funding, the home will be completed by 2015 and open on a limited basis to visitors, although it will not be furnished or fully accessible. Norton believes that the emergence of the core home will help in raising funds for rehabilitation of the two adjacent structures to facilitate fully accessible visitor use areas, including restrooms, an elevator, and interpretive program areas, as well as planning and development of the site’s interpretive programming, exhibit fabrication and installation, artifacts, and development of other community connections to an adjoining park.

“The Carter G. Woodson Home National Historic Site Study Act of 2000, H.R. 3201, to restore the Carter G. Woodson historic site, was one of my first construction bills enacted into law upon being elected to Congress,” Norton said. “Now, with public funding from the President and Congress and private funding from corporations and philanthropists, we have in the Woodson home a perfect candidate for a public-private partnership. Finally, we see the light at the end of a very long tunnel. For D.C. and the nation, we will have a new tourist site, which will bring more visitors and more revenue to our city.”

The project has been delayed by the resistance of owners to sell adjacent properties and by slow appropriations from Congress. However, Norton said that she was encouraged that the NPS is now seeking creative ways to leverage funds for the restoration through potential non-appropriated funds. She said that credit was due to Reginald Chapple, Division Chief of Office of Partnerships and Philanthropic Stewardship at the NPS, and NPS Superintendent Gopaul Noojibail, who briefed her recently. Norton has been pressing for sufficient funding for the project since the passage of her bill in 2003, which designated the Woodson home as an official NPS historic site. When, after nearly a decade, NPS was unable to provide an accurate total cost or timeline estimate for the completion of the project, Norton wrote to President Obama in 2012 to seek funding. The funding would rehabilitate the historic Carter G. Woodson Home as a national tourist site and educational facility.