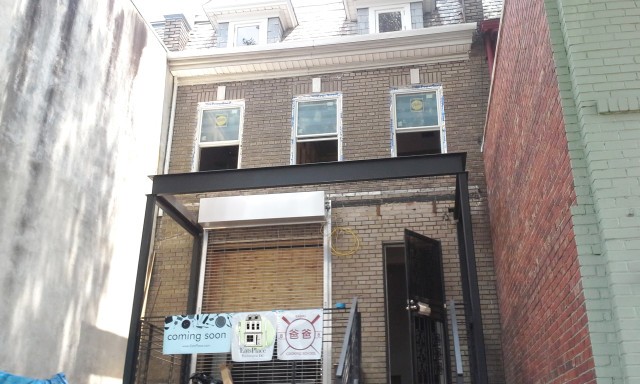 Last week we we got a brief update on EatsPlace coming to Georgia Ave across from Looking Glass Lounge. Now lots more details including their first chefs in residence.

“A new range of flavors is coming to the District as EatsPlace announces its first round of resident chefs: Charles Lyons and Jason Gehring. EatsPlace’s chef-in- residence program begins a rotation designed to broaden the palette of District dining.

“EatsPlace is thrilled to open its doors in September with such talented chefs on the debut roster,” said Katy Chang, managing member of EatsPlace. “It really is a coup to have Chef Lyons and Chef Gehring – two District-based chefs— at EatsPlace, and I’m excited to see what each of them will bring to the dining scene.”

Charles Lyons, executive chef of DC Born and Raised, brings his individual take on traditional Southern favorites to EatsPlace. His “elevated soul food” concept features local ingredients and encompasses everything from sweet to savory. Lyons is a former chef at District favorites such as Georgia Brown’s, Hill Country and Mari Vanna.

Jason Gehring, executive chef of Mason Dixie Biscuit Company, focuses on creative dishes based on biscuits. His career as a pastry chef has landed him at some of the District’s most popular restaurants, including Table, Astro Doughnuts and Chicken and Fiola.

“The chef-in-residence program is modeled after a gallery and artist residency,” Chang said. “But in this case, the chef is the artist and the body of work is the food. A lot of chefs don’t have the capital to secure restaurant space. As a food incubator and restaurant accelerator, EatsPlace provides chefs with capital infrastructure, equipment, and dining space to host restaurants and showcase their work.”