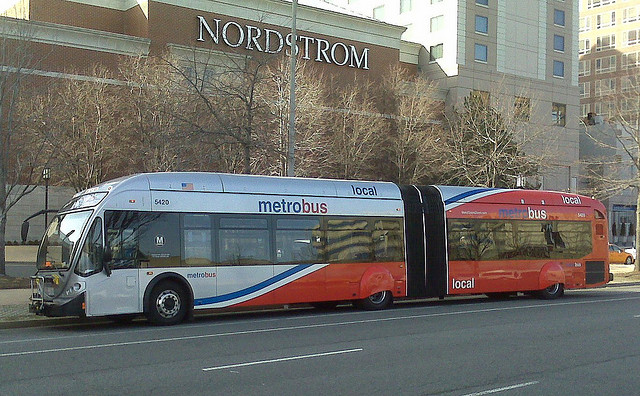 DDOT has continued to receive petitions from residents and various Advisory Neighborhood Commissions (ANCs) in support of a dedicated bus lane on the corridor, and we’ve taken note.

Quick Signal Optimization (July 2014): DDOT recently completed a focused signal optimization timing plan for the 44 signals along 16th Street NW between H Street and Portal Drive. The preliminary assessments show that this  led to travel-time savings, and DDOT will continue to evaluate the results over the next 6-8 weeks.

Additional Articulated Buses (August 2014): Later this month, WMATA will add additional articulated buses to the corridor. These longer buses will add more bus capacity on the corridor and will hopefully help get people on and off buses in a more efficient manner.

Potential “Enhanced Rush Hours” (Fall 2014): DDOT is exploring the possibility of extending rush hours along 16th Street NW by up to an hour in each direction. These would enable buses at the tail ends of the morning and evening rush hours to make up some time and improve operational efficiency.

Transit Signal Priority (TSP) and Full-Scale Signal Optimization (mid-2015): DDOT is already working hard on a citywide signal-optimization project. The northern area of the city, including 16th Street NW, will get a full-blown network optimization in mid-2015. Around the same time, DDOT and WMATA will also optimize traffic signals along 16th Street NW and in some other major bus corridors so that buses can have a little extra “green time,” which will lead to less bus back-ups and quicker travel times.

Transit Priority Study (2015-2016): In 2015, DDOT plans to conduct a transit priority study that will examine various alternative approaches for improving transit along the 16th Street NW corridor, including examining the potential for bus lanes. The study—which will be conducted with public involvement—will take approximately one year to complete, and will identify specific long-term capital needs for improving transit service in the corridor.

Throughout all the phases of our 16th Street NW Action Plan, DDOT will be collecting data and evaluating performance of buses and the broader transportation network. As the District continues to grow, we think 16th Street NW can be a model for improving public transit and maximizing  our large roads so that they can efficiently move people and support healthy neighborhood life.”