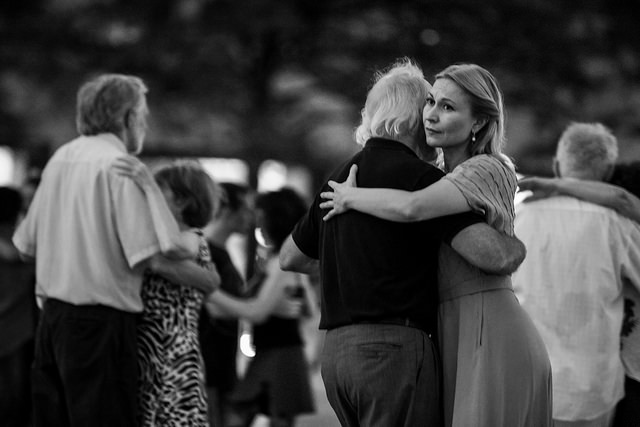 “Metrorail, the nation’s second busiest rapid transit system, grew 10 percent larger today with five new stations and new direct rail service between the Washington region’s two largest employment centers, all as a result of the opening of the Silver Line’s first phase. The new rail line is the largest expansion of Metrorail — and the first time a new color has been added to the Metro map — since the Green Line opened in 1991.

It is anticipated that the Silver Line will quickly become one of Metro’s busiest services because of the draw of two employment and entertainment destinations — Downtown DC and Tysons — appealing to riders at all times of the day and week. Serving many of the region’s great destinations, the Silver Line will deliver football fans to FedEx Field and baseball fans to Nationals Park, entertainment destinations in Arlington County, and nationally known cultural attractions in Downtown DC. About 25,000 daily riders are projected to use the five new stations after the first year of service.

By offering a convenient alternative to driving, the Silver Line is expected to transform Tysons, previously an automobile-centric, congestion prone area into a more walkable, bikeable, livable community anchored by high-density, mixed-use developments around the new stations. The Silver Line gives commuters traveling to or from Fairfax County a new option to avoid traffic congestion along I-66 and the Dulles Toll Road, while saving on fuel, parking and tolls.

With the opening of the Silver Line, Metrorail now serves a total of 91 stations on a 118-mile system in Virginia, Maryland, and the District of Columbia.

The new Silver Line tracks branch off from the existing Orange Line between East Falls Church and West Falls Church. The first new station, McLean, is about 8 minutes away from East Falls Church, and is the first of a cluster of four Tysons-area stations that are each two minutes apart. The line’s western terminus, Wiehle-Reston East, is another eight minutes west of the Tysons area.

The four Tysons-area stations put most parts of Tysons Corner within an easy half-mile walk of a Metrorail station providing easy access to the region’s second largest employment center with nearly 100,000 jobs, shopping malls and restaurants.

The Silver Line project is widely regarded as one of the most sophisticated rail system projects in the world, featuring innovative design, state-of-the art technology, pleasing architecture, natural light, and modern finishes that enhance the passenger experience. Construction of the first phase of Silver Line began in March 2009 and included the five new stations, 11.7 miles of track, rail yard expansion at West Falls Church and a new railcar maintenance facility. Work has already begun on phase two of the project, which will extend another 11.4 miles to six new stations including Reston Town Center, Herndon, Washington Dulles International Airport and Ashburn.

The combined phases of the Silver Line make it the largest and one of the most complex transportation projects in the United States. It is also the first expansion of Metrorail beyond the system’s original five rail lines, and the first time an extension was constructed by an entity other than Metro.

The U.S. Department of Transportation is providing $975 million toward the $3.14 billion total project cost for Silver Line’s first phase. The remaining cost is being covered by state and local funding sources.

The Silver Line will be the last expansion project for Metrorail unless funding is secured for projects in Metro’s Momentum strategic plan. At today’s event, Metro Board Chair Tom Downs encouraged the public to support funding for expanded capacity on the region’s transit system.

“The region as a whole is expected to add 1.5 million residents in the next 20 years, and a clear commitment to public transit is required to meet the demands on our transportation infrastructure,” Downs said. “I ask that you join me in celebrating the opening of the Silver Line today with a pledge to support the Momentum strategic plan that will prepare our system and the entire region for the next generation of Metro riders.”

“Many people worked tirelessly for more than 20 years to bring quality rail transportation to the Dulles Corridor, and our residents will now benefit from more choices about where to work, live, and recreate,” said WMATA Board Member Catherine Hudgins. “The Silver Line is a game changer for Fairfax County economically and it will improve the quality of life for many families in our community.”

The introduction of Silver Line service represents a significant service increase that benefits more than one in three existing riders. As a result of Silver Line, 37 percent of existing Metrorail riders, accounting for 260,000 Metrorail trips, benefit from shorter wait times. These include rush-hour riders traveling to or from stations north of L’Enfant Plaza on the Green/Yellow lines, those traveling to or from stations east of Stadium-Armory on the Blue Line, and those along the Orange Line in Arlington County. Another 53 percent of riders are unaffected by service changes, while 10 percent of riders see an average wait time increase of up to two minutes.

Riders at stations from East Falls Church to Court House will see trains arrive more frequently at all times, and riders from Rosslyn to Stadium-Armory will notice more frequent service outside rush hours. On the Blue Line, trains will operate every 12 minutes at all times of the day; and during rush hours, trains at Vienna, Dunn Loring and West Falls Church will arrive and depart every 6 minutes.”