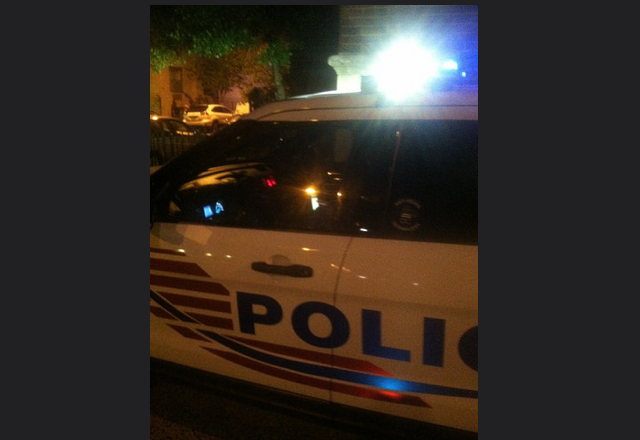 I do not send this email (and attached photo) as a malicious attempt against the Metropolitan Police Department – this is why I do not include a face or any identification in the photo. I merely want to point out room for improvement on part of the MPD. Since moving to Columbia Heights last fall I have been shocked by the lack of in-person police presence. The only police presence I regularly see occurs on the alley I live in. At least 3-4 nights per week there is a squad car regularly parked overlooking Girard, about once or twice a month they also bring out the floodlights. I am not questioning the efficacy of the squad car and lighting – they are obviously effective in deterring crime in the immediate vicinity. What I would like to question is the lack of in-person police presence in this area and Columbia Heights as a whole.

On my way home from evening class last night (7/22) around 9PM I could see the police headlights as I approached the alley on my final stretch home. I chuckled to myself and thought: “I wonder if the officer will be attentive or on their cell phone?” Sadly, the latter is typically the case. I decided to have my smartphone ready to see if I could document this. Sure enough I was able to walk DIRECTLY in front of and then to the side of the vehicle (within 3 feet of the driver’s window) without the officer ever looking up from his cell phone. This occurred over a 30-40 second period. As you can see, the officer’s thumb is clearly on the phone while he is texting. I was completely flabbergasted by the fact that this guy didn’t notice me until the flash of my camera went off. One then begins to wonder what exactly these police officers patrol.

I wonder how much more crime would be deterred if these officers were not allowed to use personal cell phones on the job, or if they went out in teams of two – one officer remains with the stationary vehicle while another patrols a 4-5 block radius on foot.

Again, my attempt is not to be malicious but to simply point out some poor behavior on part of the MPD, there is clearly room to improve. “To serve and protect”, is that how the saying goes?”