I have an issue with a dangerous dog in Capitol Hill (at least 2 documented attacks on a toddler and my dog, both required medical care) and Animal Control is failing to label the dog dangerous.

My dogs and I were walking out of my building and the other owner’s dogs were down the block, and when they saw us, the dogs lunged (dragging the owner behind them) and launched themselves at my dogs as we were backing away as fast as we could. Luckily several runners came down the block and helped us pull the dogs apart but not before one of my dogs sustained a deep puncture wound. The dog that bit him was an Old English Sheepdog, and the owner’s second dog that also attacked but didn’t break the skin is a brown Standard Poodle, and they live near 6th and Independence SE.

I posted to our Cap Hill listserv seeking the owner and she responded, admitted fault, reimbursed me for my vet bill, and swore that she never walked her two dogs together because she admitted that she does not have the strength to control both of them at the same time since they’re both aggressive and large. She said that when the attack happened on my dogs, it was the only time she walked them together and that she would never do so again. I believed her at the time.

I then heard from a mom on our listserv that these same dogs had attacked and bitten her 5 year old child (requiring a hospital visit!) prior to the attack on my dogs. Also an unprovoked attack, they were just walking by, and it was also the Old English Sheepdog that caused the wound. The mom urged me to report my attack and I did. Investigator Daniels of Animal Control came to see my dogs and he mentioned that there were several attacks on record for this specific owner and that he would have a stern talking to with the owner. I assumed Animal Control would take the necessary steps at that point. This was all back in December.

Then months later in April, I started seeing the owner walking both dogs by herself, un-muzzled, all the time, knowingly putting others in danger. So I reached out to Animal Control again to report this and to my shock, discovered that her dogs are not officially designated as “Dangerous” or even “Potentially Dangerous” under D.C. statute. And despite what Investigator Daniels told me when he visited my home, that the owner had several dog attack citations against her, he then wrote in an email to me that he believed, “There’s no indication that the dogs pose an ongoing threat to public safety.” Seriously? What about the many previous attacks, at least two of which required medical care?

Since April, I have emailed Animal Control, the Department of Health (Shakira Richardson as well as the main email address), and Tommy Wells’ office about this and have been completely ignored.

I emailed again this morning after we came out of our building to find the owner walking her two dogs on my block (exactly where our attack happened back in the winter). I reacted much quicker this time, and we were already out of reach by the time they saw us, although her dogs immediately started barking aggressively. I also started Googling again and that’s when I found the past PoPville posts about Animal Control acting in cases similar to mine so I’m sort of wondering what gives with the complete inaction in this case?

Attaching a picture from my dog’s wound (after the jump) in December so you can see that this isn’t just a scratch we’re talking about – he had severe bruising and a deep puncture wound. I don’t know how bad the little girl was bitten, but her mom did tell me she had to go to the hospital so it wasn’t nothing either. So I’m wondering if you could post this to 1. warn people in the Capitol Hill neighborhood and 2. to see if anyone has suggestions for getting Animal Control to take action here. Thank you so much.” 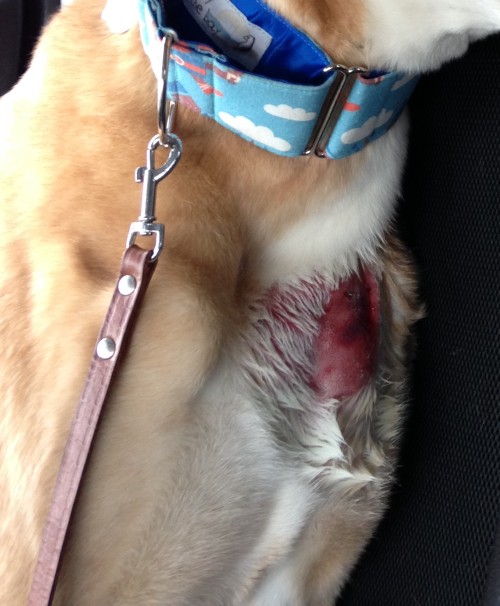