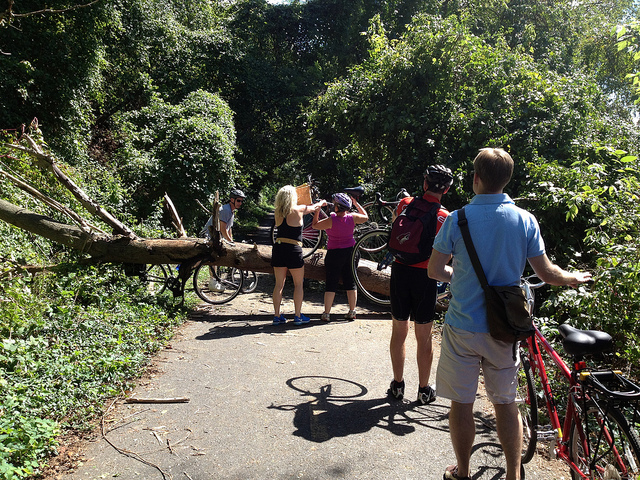 “Late in the day on Wednesday, April 30, a break occurred in the Upper Potomac Interceptor, a large interceptor sewer carrying sewage to be treated at the Blue Plains Advanced Wastewater Treatment Plant. DC Water dispatched a contractor crew to complete a bypass of the sewer line. This entailed installing a temporary sewer line that DC Water used to bypass the damaged pipe while repairs are made. The Capital Crescent Trail will remain closed while DC Water makes repairs, which are expected to take up to a week or more. The break caused an estimated 5 million gallons of combined sewage to overflow into the Potomac River. This spill ran overland and over the trail before reaching the river.

The area — the Capital Crescent Trail between Fletchers Cove and the end of the trail at Water Street in Georgetown– has been closed to the public while repairs take place and everyone is asked to avoid contact with the area. Please do not walk or bike through the portion of the trail that is closed. The tunnel below Canal Road near Foxhall is also closed.

DC Water is formalizing a clean up plan as well as a repair plan for the break.

In addition to avoiding contact with the affected land area, the public is cautioned to avoid contact with the Potomac River for 72 hours, just as is the case after any heavy rains, due to combined sewer overflows. An average of 638 million gallons per year of combined sewage flows into the Potomac River during intense rainstorms. This will be addressed in the long term by the Clean Rivers Project, the $2.6 billion program to significantly reduce combined sewer overflows to the Potomac and Anacostia Rivers and Rock Creek.”

Read more →
More Stories
Friday Question of the Day – What was your 1st concert? and If You Could See Any Band/Musician (living or dead) in Concert, Who Would it Be?Man Riding Capital Bikeshare Bike Hit by Car and Injured Very Badly behind Union Station – Police Looking for Driver