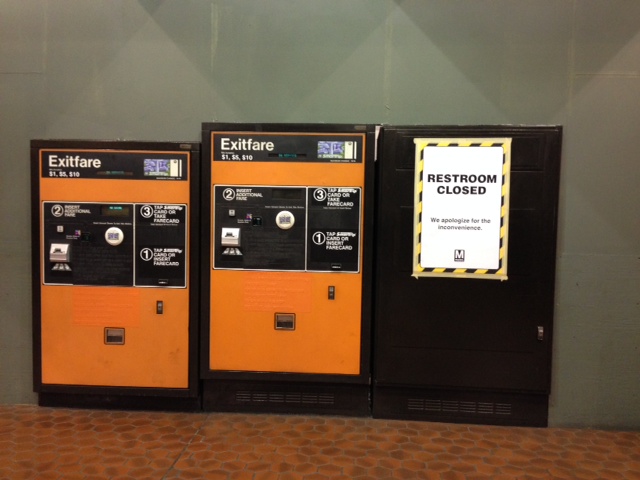 I saw the above sign at the Rosslyn metro and I know it’s been mentioned in the past – but are there now public restrooms in all metro stations? Has anyone used one? Do you have to get a key? Where are they generally located (or can you just ask the station manager?)

Here’s an interesting press release from WMATA back in 2004:

The unit, which costs Metro $39,600 per year to lease (three-year lease), costs an additional $55,000 for site renovation, installation, and water, sewer, and electric power hook-ups. There is an additional $14,400 per year for routine service/ maintenance, bringing the 12-month project cost to approximately $109,000. The vandal-resistant portable unit offers customers the use of a toilet, soap, toilet tissue, water dispensing and hand drying. There is an automatic interior chemical spray cleaning cycle after each use. Metro Board members have to decide whether to continue or expand the pilot in the future.

They also are considering whether to move the unit to Vienna/Fairfax-GMU Metrorail station at a cost of $75,000 (removal, restoration and installation costs) since that station’s existing restroom is not available to the public due to its location near safety-sensitive equipment. In November 2003, Metro managers took several steps to alert the public that starting January 4, 2004, the Metrorail station restrooms would be available for public use for the first time in the 28-year history of the transit system. Signs were posted in stations indicating restroom availability (except at a few locations deemed security-sensitive” Pentagon, Vienna/Fairfax-GMU, Arlington Cemetery and Addison Road-Seat Pleasant); officials specified conditions when customers could be denied requests to use the restrooms; and maintenance personnel repaired back room locks and cabinetry during the conversion of restrooms from employee-only areas to areas accessible to the public.

However, on March 18, Metro officials informed the Board that station restroom procedures were changed to allow the Metro Transit Police Chief to close the restrooms for public use during heightened security levels for a period of 30 days. Police Chief Polly Hanson temporarily closed Metro restrooms to the public on March 19, for security reasons. They were reopened on April 19.