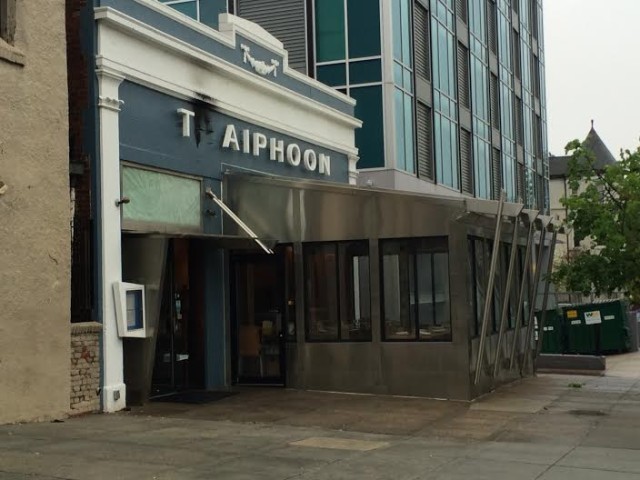 Thanks to a reader for sending word about Thaiphoon’s sign:

“Appears to have been a small fire in the sign outside…a couple of the letters are gone with small scorch stain..nothing serious.”

Not clear if the damage this time was a result of lightning but Thaiphoon just might have the worst luck when it comes to their sign. Back in August 2010 their sign was hit by lightning and they lost one of their Os. You can see a photo of that damage here.

Update from 2010 photographer Captain Easychord – not a lightning strike:

“FYI: I’m the one who took the 2010 picture (got another one this morning too… going for the complete set!)… I checked in with the folks at Thaiphoon after the “o” fire of 2010 and that one wasn’t caused by a lightning strike. The lights on the sign are illuminated 24/7 (you can see this if you look closely mid-day). During heavy rains on the morning of the first fire, water got into one of these lights and caused it to short out and catch fire. Lightning didn’t really make sense if you looked at the taller buildings all around Thaiphoon. The only reason I speculated about it back then was because of the super close lightning strikes we did have that morning. I suspect today’s fire was also related to water in the lights…”