Support us!
Search
Festival, U Street 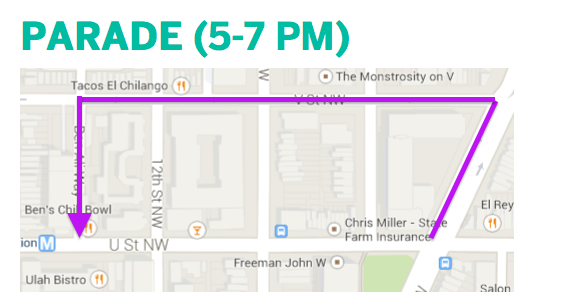 “FunkParade It’s James Brown’s bday and a join-don’t-just-watch funkhappenin’ on Saturday, May 3rd.  The day’s festivities begin at noon with a day fair and go well into the night with free live music at 11 of the neighborhood’s venues.

The parade will begin at 5 p.m. at Vermont and U Streets NW

Funk Parade co-founder Nauom says the day fair will have “activated spaces” along the U Street corridor where different businesses will offer “funk activities” throughout the day, including funk brunches and funk-infused flea markets.

After the parade, venues, such as U Street Music Hall, DC9, Tropicalia and Busboys and Poets, will open their doors for free concerts from 7 p.m. to 10 p.m.”

All the details after the jump.

CapitalBop presents two of the city’s most energizing improvisers, right in the cradle of D.C. jazz. The styles of Donvonte McCoy and Quincy Phillips (who’s just back from a world tour with Roy Hargrove) show the influence of classic bebop, ’90s hip-hop, gospel and so much else.

Activities: City First Bank will be doing Face Painting for kids on their front steps

Lettie Gooch, Junction Vintage, & District Affiliates will be organizing a Fashion Flash Mob and Street Fashion show for the neighborhood. Make sure to visit our friends over in the Fashion District between 15th and 16th on U Street.

Program Line Up & Details:
Live artists will be painting murals on the One Love Massive bus, while Urban Artistry and Alliance Francaise provides street shows and dance instruction.

Activities: District Flea will have vendors all day providing food and the only outdoor Beer Garden for Funk Parade Festival goers.

All vinyl sets by some of Washington DC’s most eclectic, global groove thumpers.

Live Mural by Art Under Pressure
1342 U St NW

Art Under Pressure will sponsor the creation of a new mural near their new 1342 U Street location. The mural will be a typographical celebration of U Street’s illustrious past. Titled “The Return of Black Broadway.” The mural will feature a quote from DC Hip-Hop elder, Head-Roc, who’s album with the same title, marks it’s 10-year anniversary.

Art Under Pressure Artists in Residence Eric B. Ricks, Cory L. Stowers, Ernesto Zeleya and more, will install the mural during the DC Funk Parade as part of the celebration.

Visit Miss Pixies and check out the rest of our community supporters on 14th Street
Merlot’s Masterpiece on 1512 U St – Art Sale and Live Art Expo
Fainting Goat and Local 16 will be hosting a Funk themed Brunch
Menchies – Find Menchie on U St and get a discount coupon for Froyo
Ben’s Chili Bowl will be celebrating the Funk Parade all day!
Nellies will have a Roof Top Funk Party All Day

Get up, get into it, get involved! Come to the muster point at Vermont and U Sts. NW at 5 PM and dance, clap, play your horn or beatbox in the parade! The procession will head west at Vermont and V St. It will proceed down V St to Ben Ali Way and then turn south down the alley as the parade comes to an end and filters out onto the U Street Corridor for a night of Live Music!

Convening at Vermont and U Sts. NW. This is a PARTICIPATORY parade, not a watching parade. Come ready to dance, clap, sing, blow a horn, whatever. In addition to YOU, your friends and neighbors, the parade will include:

We want to thank KIND Snacks for providing snacks for our Ballou High School Allstars.

We also want to thank FLASH MOP – an ever-changing, open-to-all crew of local do-gooders who whistle while they werk it and boogie while they beautify.

Busboys and Poets: A Special Edition of Live! From Busboys: Women of Funk – Performances by B. Steady w/ DJ Pinstriped Rebel on the 1s and 2s! and Open Mic! (7pm)