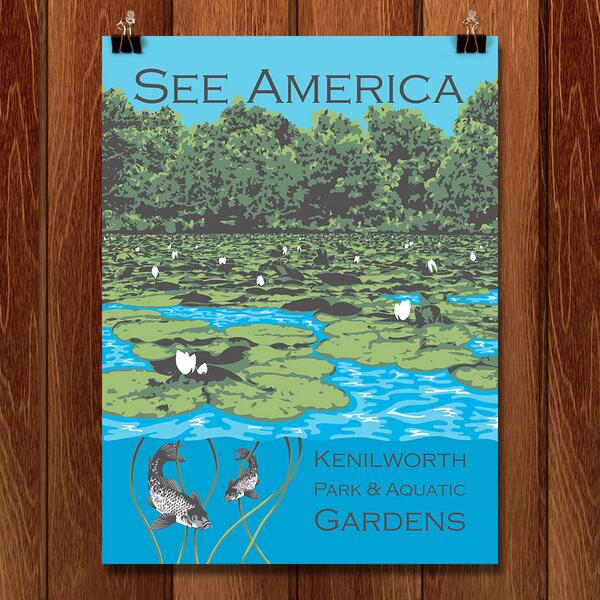 Thanks to @BDdesigns for tweeting us the awesome poster above. It’s part of the See America parks campaign.

And thanks to a reader for sending word about POSTERity: WPS’s Art Legacy & America’s Public Lands. The U.S. Department of the Interior Museum is exhibiting iconic national park posters old and new:

From 1938 to 1941, the National Park Service employed artists via the WPA to produce silk screened promotional posters for national park sites. The artists worked out of a facility in Berkeley, California, and the 14 designs they created were well received. With the onset of World War II, however, production ceased and the posters were lost to history until the early 1970s, when Leen happened upon an original at Grand Teton National Park while working as a seasonal park ranger. Fascinated with the artwork and the story behind it, Leen set out to learn more.

Just over 40 of these exceedingly rare national park posters have since resurfaced and are in National Park Service archives, the Library of Congress and with private collectors. Through the course of two decades and extensive research, Leen and his company, Ranger Doug’s Enterprises, have since not only painstakingly reproduced the 14 original WPA designs but also—working in collaboration with individual parks—created and screen printed more than 25 new designs “in the style of” the WPA artists. The iconic prints sustain a rich artistic tradition and resonate with park and vintage graphics enthusiasts worldwide.

Read more →
More Stories
Your Afternoon Animal FixNew Condos and Commercial Unit Coming to the 3800 block of 14th St, NW – Check out a Rendering and Vote on the Name