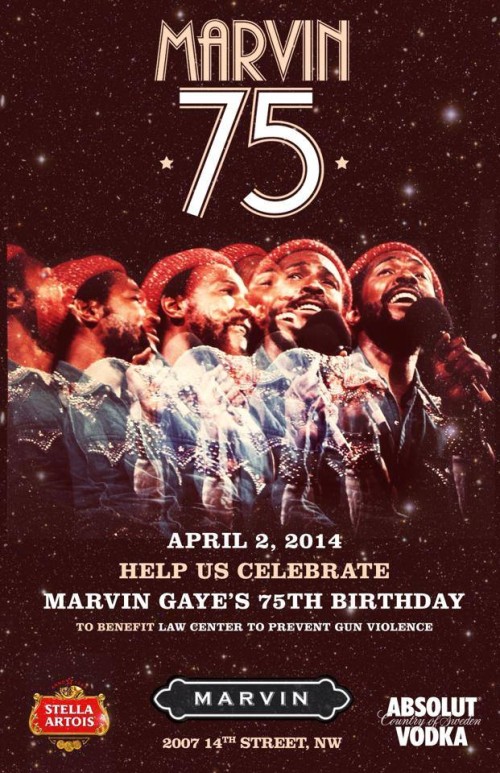 “Marvin, the Washington D.C. bistro and bar inspired by the transformative time D.C. native Marvin Gaye spent in Belgium, announces it’s 2014 Marvin Gaye Day celebration, marking what would have been the 75th birthday of the legendary singer.

The 7th annual Marvin Gaye Day celebration begins at 4pm on Wednesday, April 2nd with a performance by Gaye’s original band, The Marquees, a Marvin tradition since 2008. Joining them are soul singers Martin Luther and Maimouna Youssef, who will perform a rousing tribute to Gaye and Tammi Terrell — Gaye’s duet partner on seven Top 40 singles including “Ain’t No Mountain High Enough” and “You’re All I Need To Get By”. Gordon “Guitar” Banks, Gaye’s music director, the Savoy-Ellingtons, children of musical great Duke Ellington, and a roster of local artists will all pay tribute with musical performances throughout the day.

Washington D.C. based indie rock band, U.S. Royalty, joins the line-up this year showing how Marvin’s influence transcends not only time, but also genre. Additionally, neighboring vinyl shop, Som Records will host a “Hitsville Pop-up Shop” at Marvin selling the best vinyl from the 1960s to the early 1980s from 4pm-close.

In keeping with tradition, all proceeds from the day’s events will benefit The Law Center to Prevent Gun Violence, the beneficiary chosen by the Gaye family, and given in Marvin Gaye’s name.”