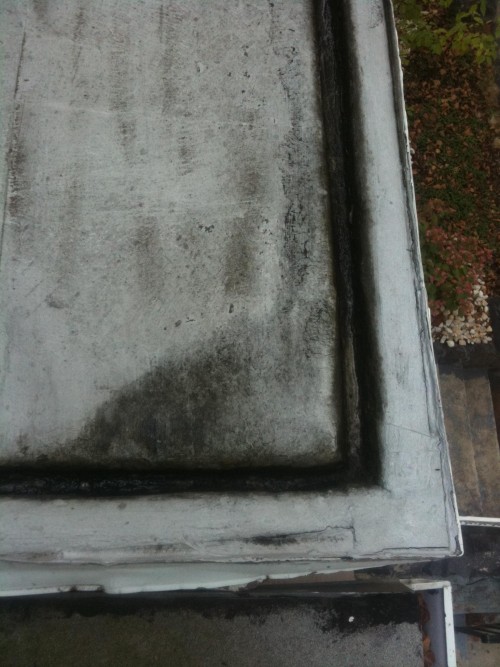 “I have a small front porch (64″ x 187″) with an old roof that has no gutter. Instead, it has an ineffective little trench scooped into it, attached to a tiny, always-clogged little pipe. The roof itself is old and most likely leaking, so there’s a good possibility that there’s some structural water damage.

I would like to repair the roof, recover it, and attach a gutter and downspout to a rain barrel (which I already have). I’m not sure who I should hire to do this, though. Is this a job that a handyman can do, or do I need a roofing company. Will a roofing company even do a job this small?

I have attached a photo of the gutter and some of the damage that makes me think I shouldn’t just slap some rolled asphalt on and call it a day.”

“My wife and I own a small rowhouse in the Shaw neighborhood. It was more-or-less a gut job when we purchased it. After gutting it, we’ve decided to keep an open floor plan on the main floor and to leave the joists exposed, rather than hanging a sheetrock ceiling. We’re ready now to install a new HVAC system and plan to install exposed spiral ductwork. We’ve had a hard time finding HVAC companies that do exposed ductwork. We have an estimate from one company, but would love to have at least two or three estimates in hand before hiring someone. Given that we’ve seen exposed ductwork in commercial spaces all over DC, we’ve begun contacting commercial HVAC companies. But we’d love some recommendations from PoPville. Anyone have an exposed duct installer recommendation for us? Thanks!”