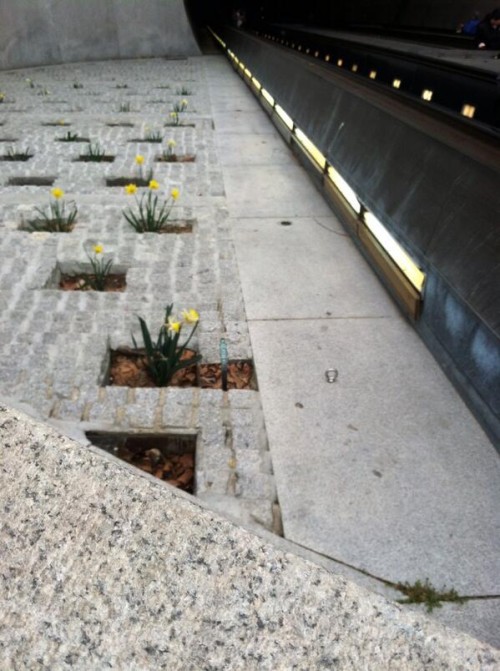 Thanks to ‏@spanuska for tweeting us:

“Hey! Is the Dupont Circle rogue gardener back? @PoPville or is #wmata prettying the place up?”

“After July, he said, “I needed artistic closure.”

That closure wound up being a merger of performance art, civil disobedience and fodder for a bunch of strangers to have an impromptu Sunday chat about government power and the need for unexpected beauty… a 6-by-6-by-4-foot boxlike artwork, which was covered with quotes about the July flower standoff.”

“Michael McBride, head of Metro’s Art in Transit program, said the daffodil bulbs planted by Docter attracted rodents. Instead, Pachysandra will be planted and repairs will be made to the pavers beginning in two weeks.”

Hmm in the photo above it looks like more daffodils but since the original guy got closure, I’m guessing it’s either a copycat or WMATA reassessed the danger of daffodils.