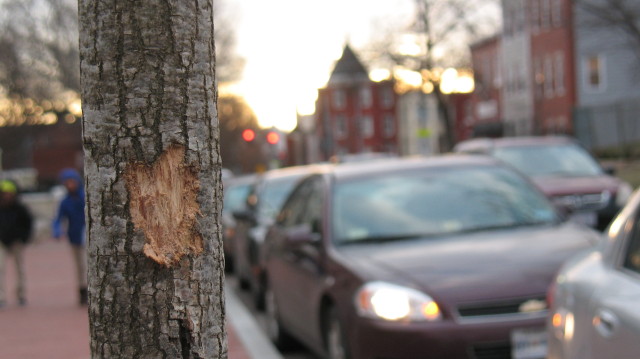 Thanks to all who sent emails:

Good Thursday morning to you. Yesterday while I was out walking – from Logan Circle along P Street NW towards NJ Ave, I saw a man hacking into a tree planted in a tree box between the sidewalk and the street. This was on the south side of the street between Logan Circle and 12th NW.

He is short in stature (around 5’5″) and has a beard and a grizzled face that marks him as a person who has spent years living on the street. He was wearing several layers of outer wear/coats mostly in the grey to black color range.

He chopped into the trunk of the tree with a rock that had a sharp edge/point to it, like it was a pre-historic hand tool one might find in an excavation of an archeological site. He was not acting agitated, shouting, cursing, or talking to himself. He was quiet, deliberate, methodical, moving slowly such that nobody would stop to pay any attention to him or what he was doing.

As he walked past me I looked past this now damaged tree, in the direction where he had just been walking, and noticed that he had notched deeply into the trunks of each and every tree on that block of P Street.

And then noticed the block ahead of me, past 11th had also been attacked. I called 911 again and begged the police to stop this man before he attacked all the trees in Logan Circle and moved on to Dupont Circle.

After this, I walked back to NJ Ave and saw that this man attacked most (but not all) the trees the length of the P Street to NJ Ave. Block after block of trees.

The police called me on my cell to let me know they made an arrest. I gave a testimony of what I saw and that confirmed they got the right person and he was in custody. They got him!

But there are many on P Street that might fall to disease and rot thanks to the actions of this one man.

I called Officer Barnes this morning. He is the officer who called me back on my cell to inform me of the arrest yesterday. I told him I wanted to press charges against this man. And I also wanted to know if he was still in police custody.

The homeless man has been scheduled for a court hearing and will be prosecuted by the District Government for damaging trees on 4th Street, 5th Street, and P Streets NW.

I am calling Commander Kitschner (202 673-6820) today to ask how the man could have been released. His release surprised Officer Barnes, who told me it was not his decision. He would have kept this person in custody. The decision was made by those in charge in the station at that time.

So I can only assume that this man, wearing dark clothing, with multiple layers, 5’5″ or so, heavily bearded and worn face…has another rock in his hand and is setting out to get more tree work done today.

He has attacked hundreds of trees, including trees along M Street which I discovered this morning on my way to work.

If you see this man, call 911 immediately! He needs to be stopped.”

MPD’s response after the jump.

“Several residents have voiced concerns about damage to trees that has been observed in the Bloomingdale and Eckington neighborhoods. This damage consists of circular holes that have been chiseled into the tree bark.

A suspect was arrested for this activity in the 3rd District and these cases are being investigated by the 3rd District’s Detectives’ Office and DDOT’s Urban Forestry Administration.

Any additional information related to damaged trees can be reported to 311. If you witness such activity, please call 911 immediately”