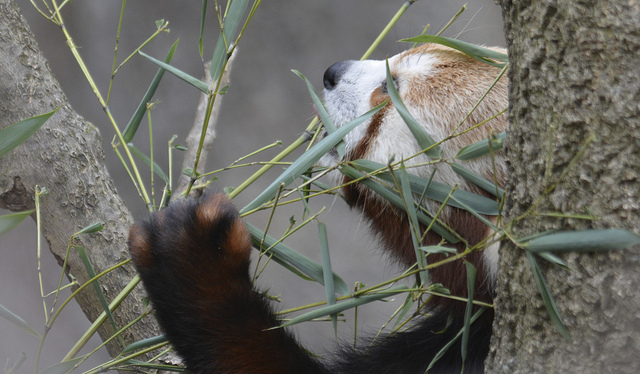 “Red pandas Rusty and Shama have moved from the Smithsonian’s National Zoo to our Conservation Biology Institute in Front Royal, Va. Rusty and Shama are paired as a result of a breeding recommendation based on the Species Survival Plan. Shama has bred successfully in the Zoo’s exhibit, but it’s possible the increased visitor traffic for giant panda Bao Bao could have compromised successful breeding for this pair. Out at SCBI, Rusty and Shama will get a little extra peace and quiet. Animal keepers report that Rusty and Shama are adjusting well to their new surroundings. Rusty immediately began to explore his new enclosure before munching down some bamboo grown onsite at SCBI.

We are working to bring in one to two non-breeding red pandas to the Zoo’s Asia Trail exhibit this spring. With the addition of Rusty and Shama, SCBI now has four breeding pairs of red pandas. Send them all some good vibes as we hope for healthy red panda cubs sometime in the summer. After a gestation of about 134 days, red pandas have litters of one to four cubs. They stay in the nest for about 90 days, remain close to their mother until the next mating season begins, and reach adult size at about 12 months.”