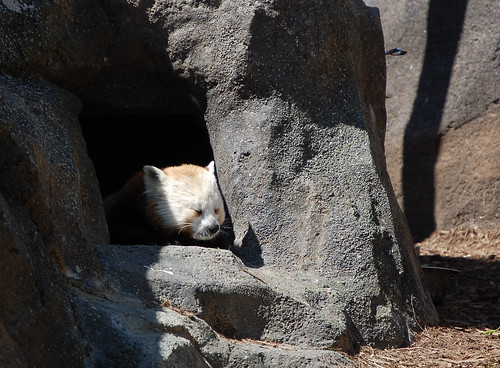 In early February, the National Zoo welcomed the arrival of Tate, the red panda bear sent in from the Cape May Zoo in New Jersey. And no one cared. I mean, it was reported on by DCist and a few local news channels, and given a blurb in WaPo, but the majority of the public still had stars in their eyes from the Zoo’s glamour days with the red-carpet entrance of Tai Shan the baby panda bear. Poor Tate. Most people don’t even notice the red panda habitat at the zoo, bypassing it entirely while bee-lining for the giant pandas. The giant pandas that, if they ever venture to come out, don’t DO anything but eat and stare at their bellies. One time I was there and a kid who was racing to see Tai Shan stopped momentarily beside the red bears just to point at them and call them “boring pandas,” leaving them feeling dejected and undoubtedly depressed. I’m encouraging all to boycott the gluttonous, overrated, Star Jones’s of the Zoo celebrity creatures and instead consider the adorable, livelier, and severely overlooked red panda bears. Tate and his friend Shama are attention seekers. Unlike the apathetic Mei Xiang and Tian Tian, the more colorful duo WANT to be watched. They’re cute and move around more, and play for the (lack of) camera, and deserve more ‘ooohhhs’ and ‘awwwws.’ If you’re ever feeling underappreciated, pay a visit to Tate and Shama and feel their pain.

Also underappreciated – the mouse with the gigantic teeth. Those guys are terrifying.

What other zoo creature gets unmerited neglect? What’s your goto spot at the zoo?