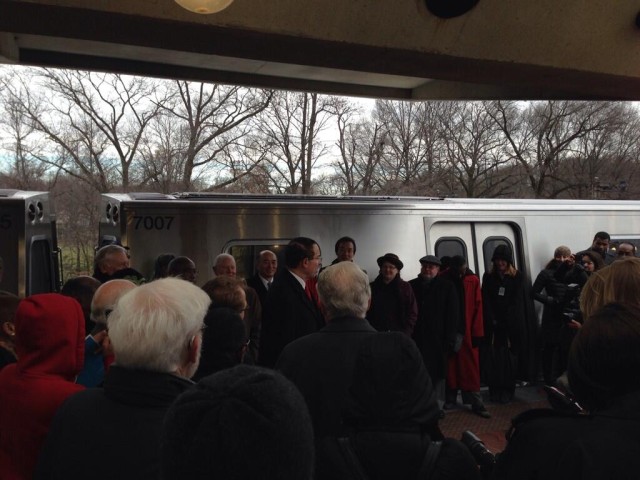 “The 7000-series railcars will be tested on the system over the next several months, and Metro will send data back to the Kawasaki production facility in Lincoln, Neb. to finalize the railcar design process. Full-scale production of the new cars is expected to begin in mid-2014.

Elements of the car that were influenced by customer feedback include:
• Interior layout, including placement of hand holds, privacy screens and seat positions
• Seat design and material
• Flooring materials and colors
• Lighting
• Design of exterior front of the train
• Accessibility elements, including markings of priority seating and call buttons

Safety is at the forefront in the design of the 7000-series cars, which are:
• Built to meet improved crashworthiness standards to absorb maximum energy in the event of a collision,
• Equipped with event recorders, meeting federal requirements,
• Constructed to meet rigorous fire safety standards, including those from the National Fire Protection Association and the American Public Transportation Association,
• Equipped with digital video surveillance systems, providing full coverage of the passenger area, operator cab and front windshield, and
• Equipped with “anti-climbers” that help keep cars upright and in-line in the event of a collision.

The first 7000-series trains, which will all be eight-cars in length, are expected to enter service late this year. Unlike earlier railcar series that can be “mixed and matched” within a single train, the 7000-series cars will operate only with other 7000-series cars. The cars will also be in a “quad-unit configuration,” meaning that the cars will operate in four-car sets, allowing the accommodation of 40 more passengers per eight-car train than an older models because of fewer operator compartments.

By 2018, more than half of Metrorail’s fleet is expected to be comprised of 7000-series cars. Metro currently has 528 new railcars on order—300 to replace all 1000-series cars, fulfilling a recommendation of the National Transportation Safety Board, plus an additional 128 cars to handle ridership growth as a result of the Silver Line. The 7000-series cars will run throughout the Metrorail system, on all lines. Metro General Manager and CEO Richard Sarles has announced that, as part of Metro’s 2025 strategic plan, the Authority hopes to order another 220 cars in 2015 to provide more eight-car trains (the longest possible length) for more capacity during peak periods.”