The recent closing of Famous Luigi’s after 70 years in business at 1132 19th Street NW brings to mind fond recollections of the many old-style Italian restaurants known as “red sauce joints” that used to offer Washingtonians pizza, pasta, and warm-hearted service in great abundance. DC has been home to Italian restaurants since at least the 1870s, but a handful from the first half of the 20th century stand out as pioneers. One of those was the place where Luigi Tito Calvi (1889-1963), the founder of Famous Luigi’s, got his start. It was Ciro’s Italian Village, at 1304 G Street NW downtown. 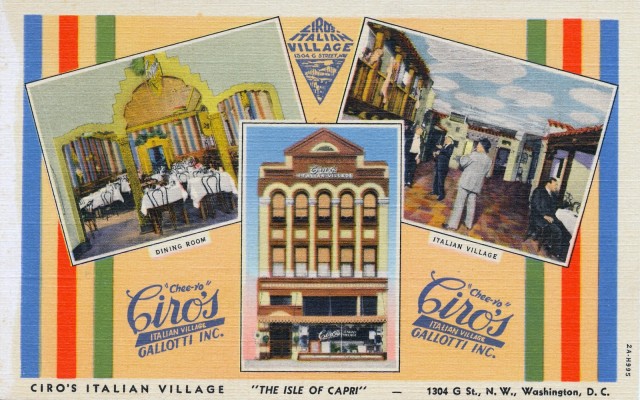 Ciro’s was creation of Ciro (pronounced “Cheero”) Gallotti (1883-1948), a feisty immigrant from Naples who had a lasting impact on the Italian restaurant scene in DC. Gallotti was an effusively outgoing individual (“one high-strung and ever exciting chum,” according to the Washington Post) who was well-suited to the role of restaurateur. He began not in the restaurant business but as a musician, a french horn player for the Italian Navy Band, according to a family history prepared by his nephew Marty Gallotti (1927-2013). Ciro loved music and played the horn since he was a boy. With his future wife Guilia, he emigrated to the U.S. in 1911, and the couple were married in New York City, where he got his first job with the Victor Herbert Orchestra before moving to Washington to live at the fashionable Raleigh Hotel (previously profiled here). 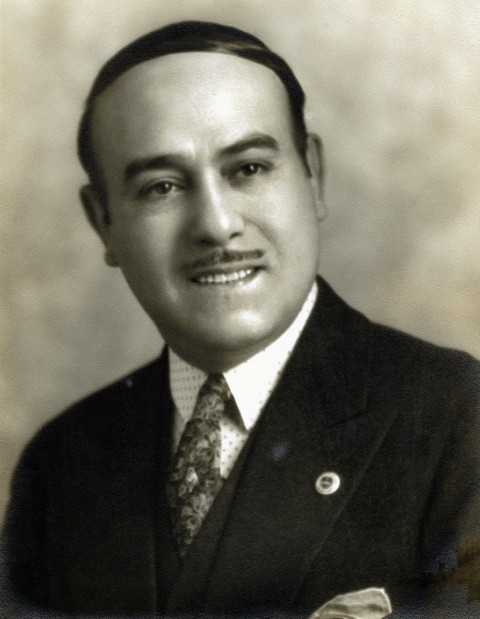 In Washington, Gallotti played in the orchestra at the popular Knickerbocker Theater at 18th Street and Columbia Road NW in Adams Morgan. On January 28, 1922, a massive snowstorm dumped two feet of snow on DC roads and brought traffic to a standstill. As Gallotti tried to get to work that evening, he got stuck on 16th Street and decided he had no choice but to turn back home. That same night the Knickerbocker suffered one of the greatest disasters in the city’s history when the huge snowfall caused its roof to collapse onto a full house of moviegoers. Many of Gallotti’s fellow musicians were injured, and a few died. Gallotti took this as a sign that he should get out of the music business, and in October of that same year he opened his first restaurant, Gallotti’s Italian-American Restaurant, across the street from the Raleigh on Pennsylvania Avenue. 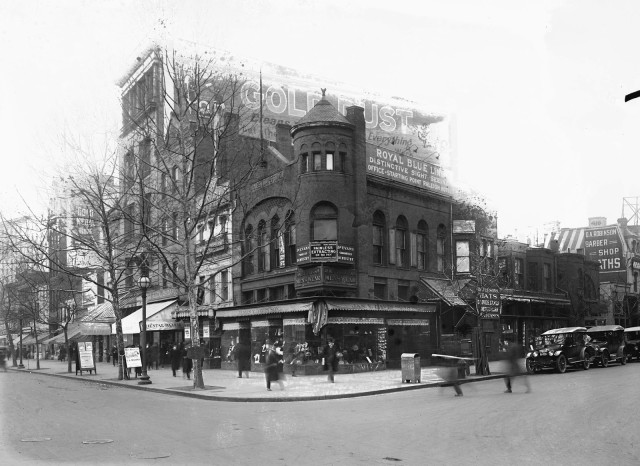 We’ve previously profiled the little two-story building where he rented space, a shop that hosted many businesses over the years. Modestly advertising his new eatery as “a good place to eat where prices are moderate,” Gallotti struggled at first. For the first two years, in summer months Guilia would supplement the family’s income by running a concession stand in North Beach, Maryland. But Gallotti’s eventually caught on, and Ciro stayed in business at this location for at least 6 years. 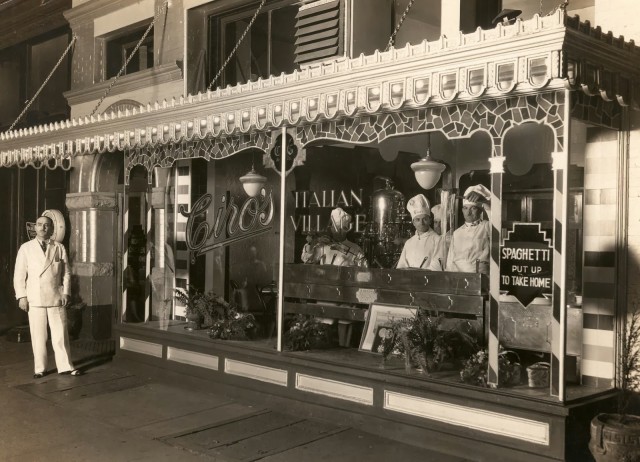 Around 1930 Gallotti moved to 1304 G Street NW, where he opened a fancy new restaurant called Ciro’s Italian Village (and later Ciro’s Famous Village). Gallotti advertised that “Here is found one of the most realistic reproductions of an Italian Village on this side of the ocean,” complete with puffy clouds painted on the sky-blue ceiling, tile-roofed wooden canopies, and stuccoed walls. Offering lunch for 50 cents and dinner for a dollar, Gallotti’s prices were indeed moderate, allowing Depression-era Washingtonians a chance to escape to a pretend Naples to enjoy spaghetti, ravioli, and “milk-fed” chicken, among other homestyle delicacies. As noted in the 1931 edition of The Book of Washington,

“I’ll see you at ‘Cheero’s'” is rapidly becoming Washington vernacular for a rendezvous for lunch or dinner, or a special individual cup of coffee brewed in an urn imported from Italy, either for a business discussion or for gay little meals for pleasure-loving folks who enjoy good food and good cheer in comfortable, cozy surroundings. 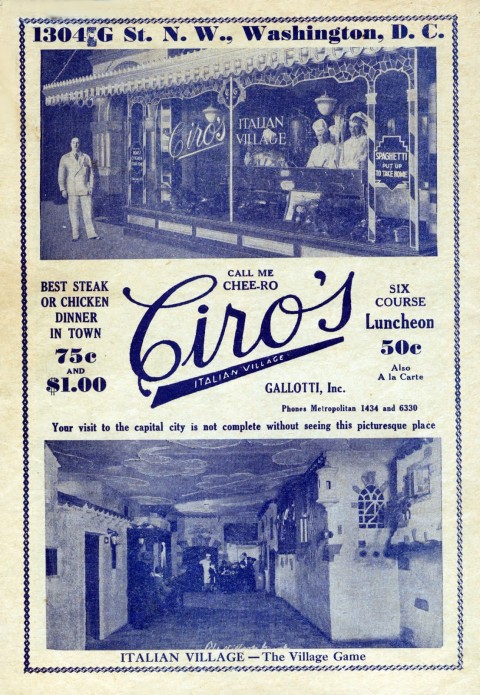 An advertisement from 1932 (courtesy of Peggy Coyle).

Ciro’s was also one of the first restaurants in Washington to serve pizza. A Washington Post article in 1941 was particularly enthusiastic: “Pizza Neapolitan, served in Ciro’s Famous Village, looks like the most beautiful pie you ever saw. But it’s made of creamy yellow cheese, baked fresh tomatoes, and the proper Italian sauces.” A simple peasant food from the streets of Naples, pizza was brought to America by poor Neapolitan immigrants. While the first American pizzeria, G. Lombardi’s, opened in 1905 in New York City, when it was first offered at a D.C. restaurant is unrecorded. A blog post on Ghosts of DC suggested in 2012 that Luigi Calvi may have been the first to offer pizza in D.C., but I suspect that earlier restaurateurs like Gallotti had it before Calvi was on the scene. For example, the dish, originally called “La Pizza,” was advertised for sale in the Evening Star in 1936 at Macina’s restaurant, operated by Louis D. Macina (1893-1950) at 1625 Connecticut Avenue NW. This was fully two years before Calvi placed his ad in the Washington Post. Ciro Gallotti advertised little in the 1930s, but Ciro’s Italian Village probably offered La Pizza in those days as well. 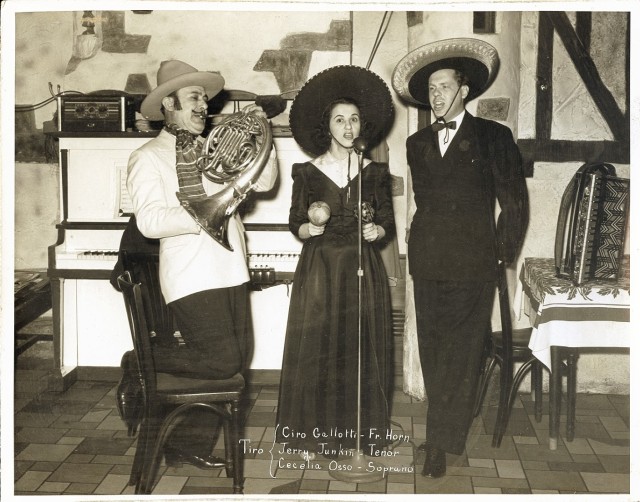 The energetic Ciro Gallotti was always the epicenter of the Ciro’s Famous Village. Passionate about Italy and deeply disturbed by the Italian government’s disastrous alliance with Hitler during World War II, Gallotti was ecstatic when Benito Mussolini went into hiding in 1943. On being handed a paper with news of the ouster one evening, Gallotti shouted into an entertainer’s microphone, “Muss quit the fuss!” and started handing out free beers (which were quite scarce and subject to strict rationing) to startled patrons. Grabbing his favorite French horn, he offered spontaneous renditions of “Anchors Aweigh” and “The Caissons Go Rolling Along.” Then he called his wife Guilia to the stage for many effusive hugs and kisses, much to her embarrassment. Two months later, when the fascist government surrendered to Allied invaders, Gallotti once again rejoiced and handed out more thousands of free glasses of beer. 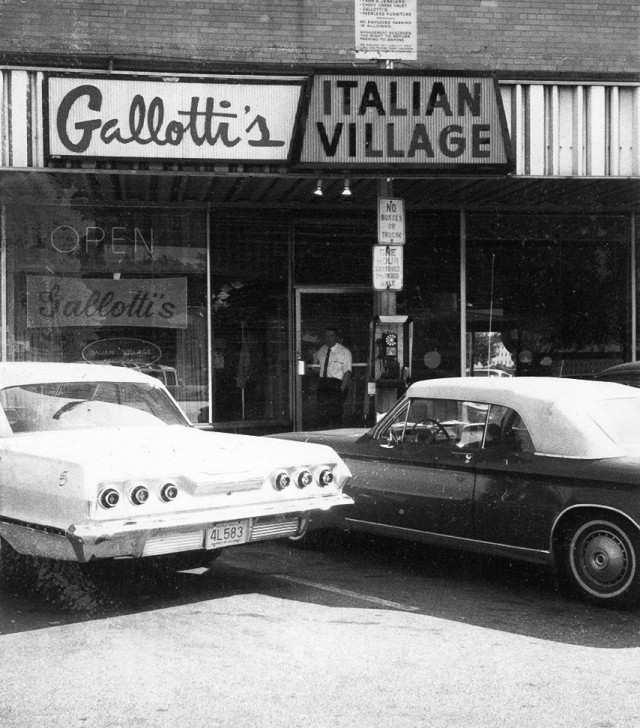 After Gallotti died in 1948, Guilia took over the business with the help of her nephew, Carmine Gallotti (1902-1964), and his wife. They moved the restaurant to 1707 DeSales Street NW, opposite the Mayflower Hotel, in an area where many of the city’s finest eateries were located. In the 1950s Ciro’s graduated from its early red sauce days to offer more sophisticated dishes, such as roullade of veal (a house specialty), mussels oregonata, and scallopine allo agro dolce. While the really fine Italian restaurants were still in the city’s future, Ciro’s pointed the way. The restaurant finally closed after Guilia Gallotti’s death in 1957, although Marty Gallotti, son of Carmine, carried on the family tradition by opening Gallotti’s Italian Village in 1962 at 4441 Connecticut Avenue NW in the “WMAL Shopping Center,” which we’ve also previously profiled and which is currently being torn down. By the time Gallotti’s Italian Village moved to Gaithersburg in 1978, D.C. was poised for a renaissance in Italian fine dining that would surely have amazed and delighted Ciro Gallotti.

I am indebted to Peggy Coyle for providing beautiful images and information from the Gallotti family’s archives. Other sources included my recent book Historic Restaurants of Washington, D.C.: Capital Eats (2013); Greater Washington Board of Trade, The Book of Washington (1930 edition); John F. Mariani, How Italian Food Conquered the World (2011); and numerous newspaper articles.