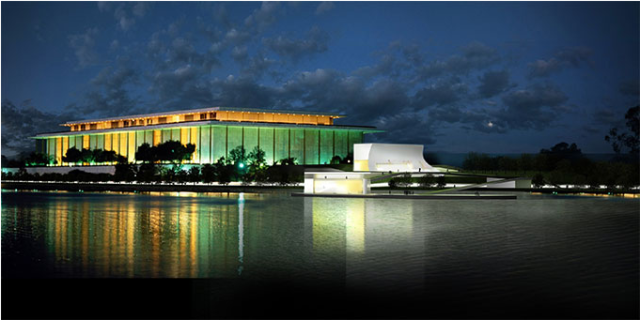 “David M. Rubenstein, Chairman of the John F. Kennedy Center for the Performing Arts, today announced an additional $40 million in gifts for the Kennedy Center expansion project, including a significant leadership pledge from Michael and Noémi Neidorff and the Centene Charitable Foundation. Mr. Neidorff and David Rubenstein serve as co-chairs of the expansion project’s capital campaign. With these new commitments and the initial $50 million pledge from Mr. Rubenstein, $90 million has been raised for the Kennedy Center’s $125 million campaign. As previously announced, the design and construction costs for the expansion project will be paid for entirely with private funds.

The Kennedy Center’s expansion project will be constructed south of the existing facility and will include rehearsal space as well as dedicated classroom space and multipurpose rooms for the Center’s extensive arts education programs. Public access spaces will include gardens which will fuse the Kennedy Center with the landscape and river and an outdoor video wall upon which simulcast performances and other multimedia events may be projected. The exteriors will utilize translucent Okalux, glass, and Carrara marble, the same Italian marble which clads the original facility.