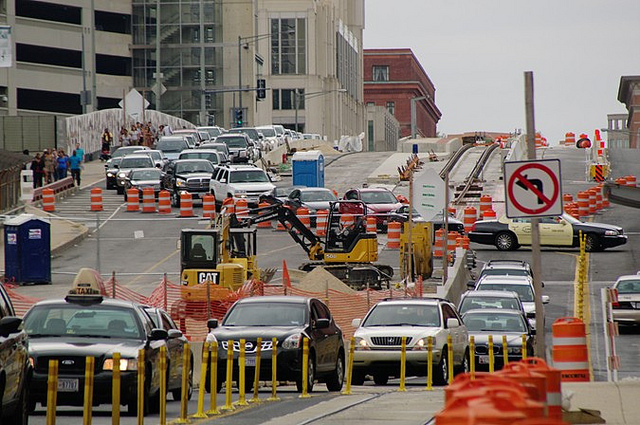 “The District Department of Transportation (DDOT) has announced the DC Streetcar construction team will implement intermittent closures of the eastbound and westbound lanes of H Street, NE between North Capitol Street, NE and 5th Street, NE starting on Friday, December 6, 2013 through Thursday, December 19, 2013. The closures are needed for the installation of overhead catenary system (OCS) and to complete the permanent traffic barrier at the Western Turnaround.

For any combination of closures, local traffic will be permitted access to/from the Union Station garage and Kaiser loading dock entrance. Traffic Control Officers (TCO) will be present to assist with pedestrian movements, to direct vehicles in and out of the garage, and to control traffic at H Street, NE and North Capitol Street, NE.

All eastbound H Street NE traffic, west of the Hopscotch Bridge, will:

All westbound H Street traffic, east of the Hopscotch Bridge, will:

During the westbound closures, traffic on southbound 4th Street NE attempting to go west on H Street NE, will:

WMATA riders are encouraged to utilize the bus stop on H Street, NE at 6th Street for both eastbound and westbound service. WMATA will provide signage at existing stops that are not in service during the closures.

Loading zones will be impacted while work is taking place in a specific block. Freight and delivery vehicles are asked to please adhere to all parking restrictions. Advanced warning variable message signs (VMS) will be updated to notify commuters of each closure. A VMS will be stationed east of the Starburst (15th Street, NE and Benning Road, NE) to direct westbound truck traffic to proceed west on Florida Avenue, NE, to the detour route on K Street, NE.”