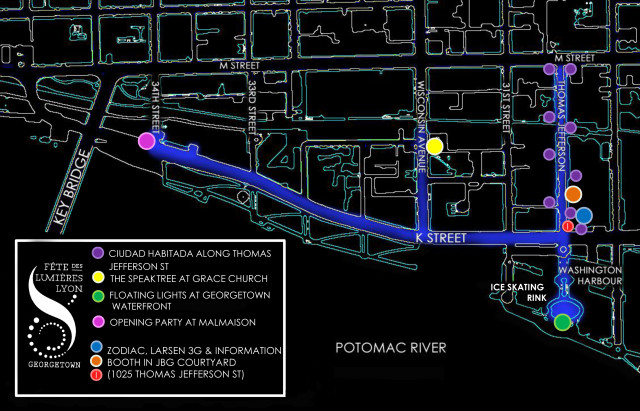 “Dec. 10, 2013 – Georgetown’s historic district will celebrate the holiday season with four international artists creating five interactive public art displays, with light as their medium, for a week-long festival inspired by the world-renowned Fete des Lumieres or Festival of Lights in Lyon, France.

“Ciudad Habitada” presented by Travesias de Luz, a Spanish urban art collective led by creative director Luisa Alvarez. Ciudad Habitada features a collection of lit mannequins fashioned from transparent tape and other materials posed in everyday human activities. The mannequins will be in various locations along Thomas Jefferson Street NW throughout the week.**

“Floating Lights” presented by Travesias de Luz. This interactive display features a 10 ft by 32 ft wall of colored light tubes that can be switched on or off to create words, messages or pictures. Located at the Georgetown Waterfront near Washington Harbour throughout the week.**

“Larsen 3G” created by Fabien Bourdier of Blixlab (with Samuel Mathiou and Labomedia) and produced by Merryl Messaoudi of Crossed Lab. Larsen 3G is an interactive video installation, projecting images and messages submitted by visitors from their mobile devices onto surrounding architecture. Larsen 3G will be displayed in the courtyard of JBG’s Jefferson Court office building at 1025 Thomas Jefferson St. NW. Opening Weekend Only: December 13 and 14.

“The Speaktree” presented by Lucion Media of Montreal, Canada. The Speaktree is an interactive tree inside an inflated vinyl bubble. Visitors will send text messages or questions that will be illuminated along the tree’s virtual branches. The Speaktree will be on display on the lawn at Grace Church, 1041 Wisconsin Ave. NW. Opening Weekend Only: December 13 and 14.” 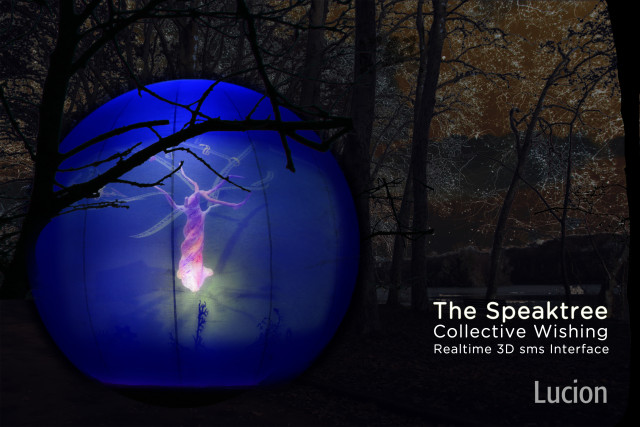