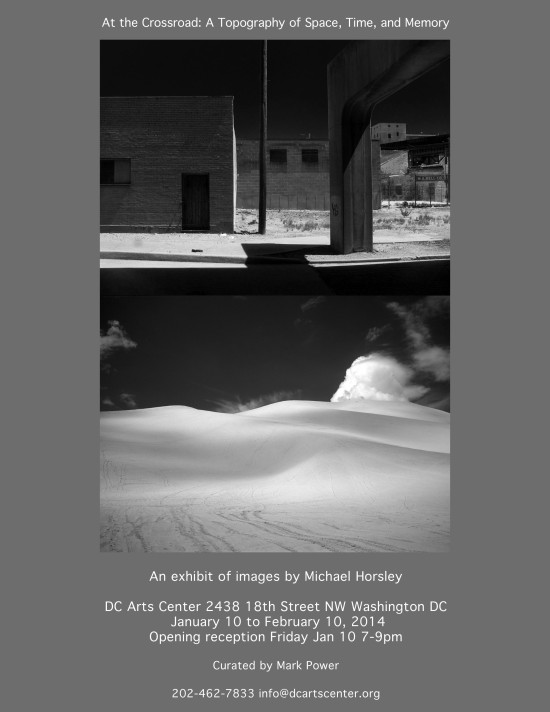 “At the Crossroad: a topography of space, time and memory”

Landscape is itself reflection; the reciprocal process whereby we map the world, physically, intellectually, and imaginatively. It is our way of .. interpreting what lies outside us. The drawing of this boundary between ourselves and the world, between what we know and what we imagine, what we control and what controls us, is not simple. Like all frontiers it is a potential battle-line.

Michael Horsley took us to the city first, and with his street photography a decade or more ago, it was obvious the document was his entrance point. But even back then his exit point seemed a remove from documentation. The gritty city streets, the buildings that always seemed nocturnal even when they were photographed in broad daylight. At the same time, Horsley was broadening his art. In his day job at the National Archives, he had access to the original prints of many of the great 19th century American landscape photographers such as Timothy O’Sullivan and John Hillers and their landscapes exerted a powerful pull, so much so that eventually he decided to see for himself the actual sites. It didn’t take long for his Western landscapes, taken while standing in the footprints of the 19th century masters, to take on the characteristics of his urban work; these desert sites dark, brooding, and laden with layers of art, history and myth became in Michael’s words “ more like imagined locations or dreamscapes … than documents of specific time and place.”

In making the juxtapositions and associations seen in this exhibition, Michael seems to be interrogating the work to see what unconsciously motivated him to take the streets of an earlier time and combine them with the bleak desert vistas his mentors had documented a century earlier. Just as the city streets depicted in this show have been subject to the ravages of urban development so too has the American West been transformed by human settlement and the slow grinding of the geological clock. That remove, the blending of past and present, allows time and myth to creep into images of street and desert, giving them poignancy and depth.