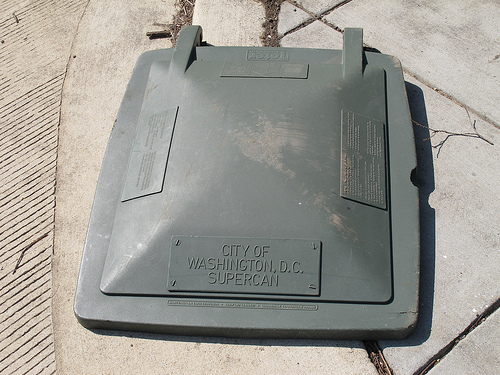 “Mayor Vincent C. Gray joined other District leaders today to announce that the Department Public Works (DPW) will begin distributing new Supercans in January 2014 to residents who receive once-a-week trash collection services from DPW. Mayor Gray made the announcement at a press conference attended by Ward 3 Councilmember Mary M. Cheh, Chairperson of the Committee on Transportation and the Environment, and Kenyan McDuffie, Chairperson of the Committee on Government Operations. DPW Director William O. Howland, Jr. and District Department of the Environment Director Keith Anderson also participated in the press conference.

“I know there are a lot of people inquiring about when they will get their new Supercans. I also know many people have communicated through Grade.DC.gov that they have outgrown the 32-gallon recycling can and need more capacity,” said Mayor Gray. “I am happy to announce the wait is almost over. Starting in January, the Department of Public Works will begin delivering new Supercans and 64-gallon recycling cans to the 75,000 households that receive once-a-week trash and recycling collection services from DPW.”

Mayor Gray noted that by increasing capacity for residents to recycle, the District takes a significant step toward achieving the Sustainable DC Plan’s target of diverting 80 percent of the waste stream through recycling, composting, and waste conversion.

DPW Director William O. Howland, Jr. said, “Residents of twice-a-week trash collection neighborhoods will get new 32-gallon trash cans and they will receive 48-gallon recycling cans, which are 50 percent larger than the current 32-gallon recycling cans. DPW will begin delivering these new cans in the spring. We expect that all 105,000 households will have their new trash and recycling cans by July.”

More than 10 years have passed since the District’s supply of Supercans was refreshed. Proper containerization of trash is a major defense against rats and other animals.”