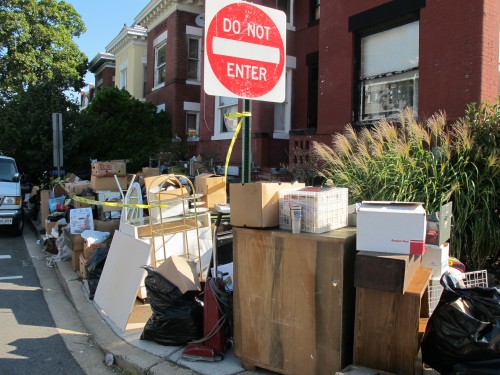 Seeking help for a hoarding resident:

“I live in a mid-rise coop building, where we own our unit and sit on the coop board. We’ve had a recurring issue with an elderly resident who is hoarding in their unit. Over the years, they have been cited for hoarding paint cans (empty and full) and papers, which is a very real fire hazard, particularly in a 1960′s, pre-sprinkler building. They were recently “checked on” by a board member, who found there were no surfaces to sit on in the unit, a fridge full of rotting food, no working lights or smoke alarm, and no stove, microwave, or other way to cook food – not that they’d have a clean place to eat it – and a pile of paint cans. Our concern is for both the resident’s health and the safety of our other residents, so I wonder if anyone has dealt with a similar situation in DC.

A quick recap of our past efforts: we’ve gone the neighborly route, with many residents offering assistance, including cleaning out the unit, but the resident fills it back up. We’ve gone through the board and cited the resident for violating our bylaws, but they haven’t complied. We’ve, sadly, gone the legal route and sought an eviction, which they were able to prevent with legal assistance from the AARP, so long as they agreed to keep the unit in safe condition. That clearly isn’t happening. Last year, the resident fell and broke their hip, but couldn’t get help for days, so they were stranded on the floor until a neighbor got worried and got the master key. Still, the hospital discharged the resident back home with no long-term solution. We’ve also involved local non-profit social services, but the resident refuses to speak to a social worker.

Long story short – this is a terrible situation, and we’re very concerned for the resident’s well-being. It’s clear this person cannot live on their own unassisted, but they’ve refused any help and have no family to intervene. We want to respect their privacy and independence, but we also have 30 other units to think of. A fire would be devastating to everyone. We want to help this person into assisted living, but don’t know how to do it short of an eviction.

Has anyone else run into a similar issue? Did you find an agency to intervene that helped? We’re worried contacting adult protective services could lead to more harm for this resident, who we only want to help.”