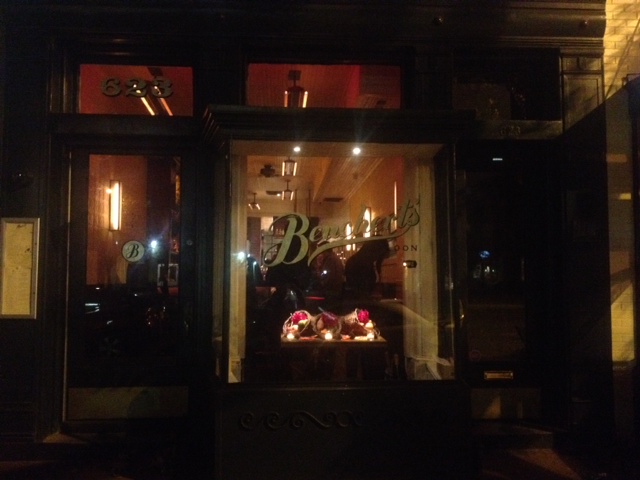 This edition of Eating Around Town was written by Abbey Becker.

I want to love Beuchert’s Saloon (623 Pennsylvania Avenue SE) again. I used to live near Eastern Market, and I remember walking by the papered-over front window on my twice-daily walk to the Metro and looking for some kind of notice about their opening. Once they did, I think I probably went at least five times before I moved away in July. I was taken with the atmosphere, the service, the cocktails, the food.

After a visit last weekend, though, I have to wonder if something happened, or if they just had a bad night. I’m hoping it’s the latter.

The feel is much the same, I’m happy to report—it still exudes a neighborhood feel and a genuine kind of coziness that’s tough to find in that part of town, or in the city itself, for that matter. Once inside, it’s easy to forget that you’re in the middle of a big city in 2013, rather than inside an early 1900s speakeasy. (It was once a saloon, and later a speakeasy, from 1880 to 1934.) The twin taxidermied bison heads over the hand-built walnut bar define, in my mind, what makes Beuchert’s great: attention to detail with a little bit of quirkiness. The dim lighting, subway tiling on the walls, brass accents, and jazzy soundtrack make for a throwback that’s all respect for the past and no gimmick. One of my favorite parts is that the owners are still working on the floor during service, even though Beuchert’s has been open since March. To me, that’s a mark of true pride and care.

If you’re planning a visit, I’d recommend sitting at the front bar. In my experience, it’s more fun to perch on the wooden barstools and interact with the bartenders. While the tables at the back make dinners with more than one friend easier, it feels a bit lonelier back there, like you’re missing the action. And there’s something to be said for eating and drinking a fancy cocktail at the bar that makes you feel like you’re echoing what happened there so many years ago.

Their cocktails are killer for sure—boozy without being overpowering. They’re never sweet, and you’re liable to taste flavors stemming from the liquor itself, like anise from absinthe or the juniper notes from locally made Green Hat Gin. They’re priced about average for a quality DC cocktail, at $11 each. Some of the offerings change seasonally, though if you have a favorite drink that’s no longer on the menu, they can often still make it for you. Of note is the Abel, a hot, spiced rum-based cider cocktail topped with cold cardamom foam. The play of hot and cold is a wonderful surprise, and the cocktail itself isn’t too sweet or spiced. My friends and I also ordered the La Paloma, Millionaire, and Beltway Boy (which is no longer on the menu, but it’s excellent).

The draught list is pretty decent, though it’s $7 for a beer. If you’re coming to have a few beers, you might be put off by the pricing. (Not that $7 is completely unreasonable for a beer, but it’s more than you’d expect to spend when Tune Inn is a few blocks away.) The wine by the glass selection is small and a bit pricier than I like to spend on a glass, but my tastes are pretty unrefined when it comes to wine, so I can’t tell you if they’re a good value.

Food-wise, I’ve had really great experiences here. In the past, the dishes I’ve had were balanced and well-seasoned, and there was always a surprising ingredient that made the dish. In my last visit, though, we were disappointed; the food was cooked well, but it lacked the flavor punch that I was used to.

The highlight of the meal was definitely the desserts. Both weren’t overly sweet, and even though the candy bar (caramel, chocolate, crunch) could have been cloying, there was enough bitterness in the chocolate to make it almost savory. The goat cheese and cranberry sauce gave the cheesecake round a lightness and tartness that left us wanting to order three more of them. I’ve had the fudge popsicle in the past, which comes with marshmallow fluff and graham cracker crumbs, and it’s delicious and fun to eat.

Another must-order is the fennel tagliatelle. A fennel puree is folded into the handmade pasta, and it’s served with a sprinkling of roasted lobster pieces, grilled swiss chard, and a light lemon mascarpone. We loved the slightly briny, light, citrusy flavor, and the bit of sauce that’s left in the bottom is downright slurpable. A half order (which is quite small, and definitely wouldn’t suffice for a meal) is $16, which I thought was fairly steep based on how much we got. Even so, it was so good that it almost didn’t stick with me.

We’ve had the bone marrow before, and it’s been smooth and unctuous. This time around, it came out gloppier than I remembered and tasted mostly like oil, rather than the rich fattiness we were used to. The grilled bread is great, and the coarse salt and pistachios (if you remember to add them) are a nice foil to the oiliness, but the muted flavor of the marrow itself ultimately overpowered anything else.

The bitterness of the radicchio was slightly softened by the charring, but the basil crema overtook the vegetable and the feta-pine nut salad on top. I would have loved more feta for a saltier flavor. The same went for the mushrooms, which were much improved with a grind of salt and pepper. The pork shoulder was underseasoned, too, and had a strangely thick layer of hard fat that made the pork too chewy for my taste. Its accompanying fingerling pork belly hash, however, was delightful and bacony, and the cippolini onions and apples played well against what could have been a heavy hash. I would order just the hash, if I could. The rockfish was light, brothy, meaty, and crispy, but it was forgettable overall and needed more seasoning. The broth itself was so good that one of us literally drank it from the bowl.

Overall, the accompaniments to each dish were the stars, rather than the main ingredients themselves. And when you’re paying $28 for a main dish that probably won’t fill up one person, it’s tough to justify ordering an entrée again. (That being said, I’ve had the burger before, and at $14 fully loaded, it’s one of the best in the city. Fans of the former PS 7’s burger might experience déjà vu—the chef, Andrew Markert, was once their chef.)

Beuchert’s now takes reservations by phone for any size party, which I highly recommend doing for a weekend night. They serve brunch all weekend, too.

I’m really hoping that Beuchert’s ups its game to its original opening grandeur, because this place was once a real gem in not just the Eastern Market community, but in the city as a whole. It doesn’t feel scene-y or pretentious, and it’s small enough that it doesn’t feel as packed and loud as many places get on weekend nights. It’s clear that the owners care deeply about their restaurant, but it might be time to go back and make a few tweaks.