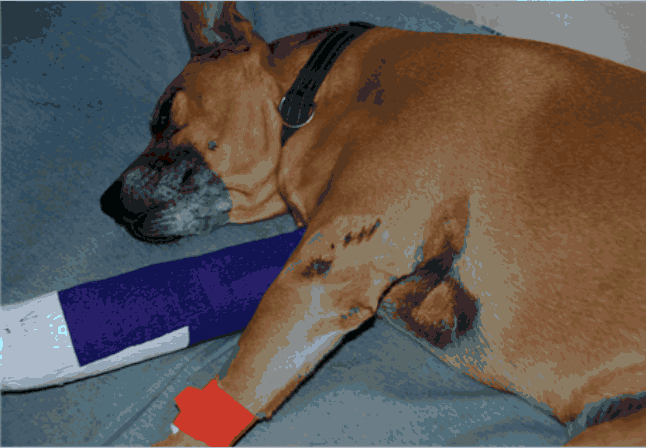 ARCHIE RESTING THE DAY AFTER HE GOT HOME, WITH HIS GOOD SIDE UP

“Sorry for the delay in posting this, but I wanted to give everyone an update on Archie (aka Scrappy).

He is doing well under the circumstances. The hospital released him late Tuesday evening, and we have pretty much taken the week off and stayed home to monitor him. Miraculously he had no catastrophic injuries. His lungs, heart, spine etc were unharmed. He has a very large gash on one leg that cannot be sutured, so we’ve been taking him to the vet every day to have the dressings changed. He had a nicked spleen which caused some internal bleeding but the vet decided to let it heal on its own.

We remain concerned about some high liver test numbers which we hoped would have gone down by now, but so far our vet is not too alarmed. There seems to be some cartilage damage on the one leg, which we won’t know for awhile whether he has any permanent mobility issues. He is walking though, and I even took him for a stroll around the block this morning. (We went past 14/S, I guess sort of a get back on the horse concept!)

Other than that, he had some pretty horrific road burn, which has already begin to heal. The first few days he was lethargic, but the last few days his spirit has slowly been returning. We cannot express how enormously grateful we are to have him.

The final vet bill at Friendship Animal Hospital was significantly less than the estimate, and I noticed later at home that they removed several charges from the estimate so it seems they definitely cut us a break. He got absolutely fantastic care there, and we are very appreciative of their efforts.

This week, we used our neighborhood vet at City Paws for the daily visit, and they have also been great, he seems to be their star patient. I feel he is getting really good care there.

I filed a police report; it seems there will not be charges against the driver. I have been in direct contact with the insurance agent, and they have verbally said they are covering 100% for the medical care. So we shall see.

I was able to track down 1 of the 4 bystander/witnesses myself later Sunday afternoon. (Note to the manager at Le Diplomate: I didn’t realize until I got home later that I was standing in the middle of your dining room still splattered in blood, needless to say you were the epitome of graciousness. And I say that not only because you followed me outside to hand me a container of your delicious pastries.)

A second witness was found through the PoP posting, and she was actually in the crosswalk with us, so was the most important of the four. The 3rd saw a sign I posted at the intersection and called just yesterday. Also, a woman who lives in a building on the corner witnessed everything from her window and contacted me after seeing the sign. So I am VERY grateful for everyone offering their support.

Finally, I want to say that all of the warm thoughts we have received the last week have been very encouraging. It definitely brought us comfort to know we were not alone and that so many people were sending good vibes. I have to confess I had some trepidation about posting; it just seemed like such a private kind of situation. As it turns out, I am really happy I did, and of course elated that it produced positive results. So HUGE thanks to all who read, posted and rooted for our little Archie.