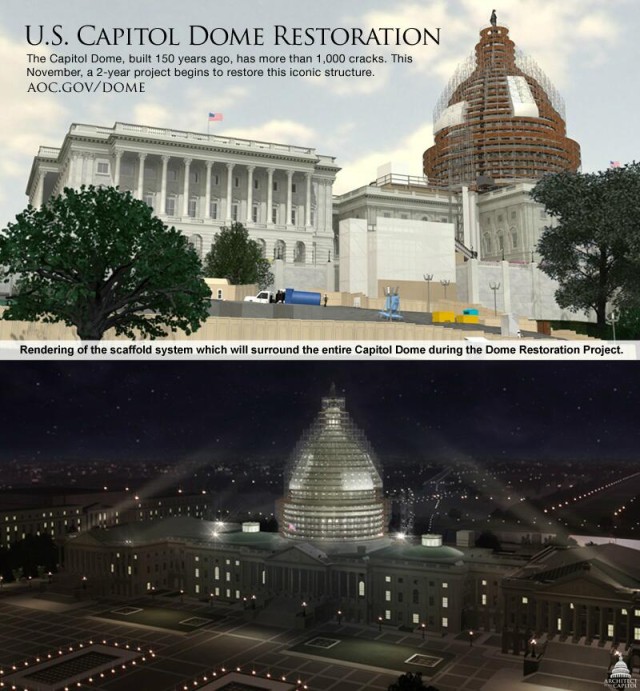 Hopefully it will look as good as the Washington Monument does at the moment. From ‏@uscapitol:

“Restoration of the #CapitolDome begins in November. Dome will be scaffolded for 2 yrs.”

From the Architect of the Capitol:

“The United States Capitol Dome, symbol of American democracy and world-renowned architectural icon, was constructed of cast iron more than 150 years ago. The Dome has not undergone a complete restoration since 1959-1960 and due to age and weather is now plagued by more than 1,000 cracks and deficiencies.

For approximately two years residents and visitors will see a scaffold system surrounding the entire Dome from the base of the Statue of Freedom down to the top of the Dome skirt (base of Dome). Scaffold towers and scaffold bridging will also be constructed on the west side of the U.S. Capitol Building to help move materials to the work areas.

At the interior of the Capitol Rotunda, a white canopy system in the shape of a doughnut will be installed to protect the public. The configuration allows the Apotheosis of Washington, in the eye of the Rotunda, to be seen throughout the restoration process. A covered walkway through the Rotunda is required as the canopy system is installed at the beginning of the project, as well as at the end of the project.”