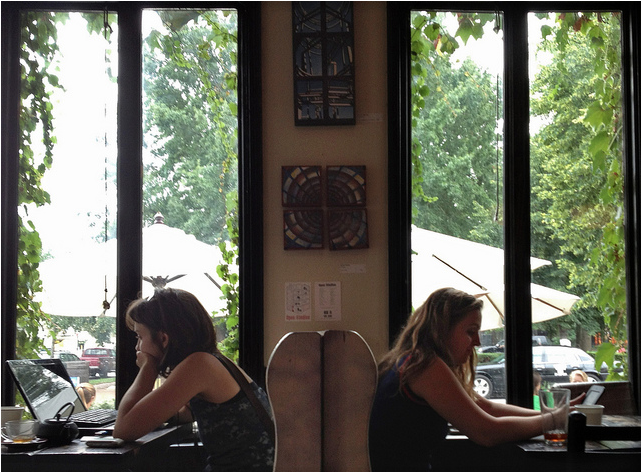 Jeremy Barr is a native of suburban Maryland, he now lives in Mount Vernon Square. He last wrote about MPD light towers.

In a city like Washington, D.C., there are many ways to show off your creativity and sense of humor. And in this new, wired, interconnected world of ours, one such medium for expression is your WiFi network.

When I get up in the morning and connect my devices, I always wonder why someone chose to name their network “kittenfat.” Another neighbor’s choice — “notyours” — makes clear their antipathy toward sharing.

With an afternoon to burn and a gassed-up Vespa, I decided to scoot around town in search of D.C.’s most clever WiFi names. I hit up about 15 cafes and bars (mostly in Northwest) in total.

Based on my extensive, scientifically-sound research, I can posit that internet memes are a big source of inspiration. There’s “ERMAGERD” (Adams Morgan) and “ErNardNet” (Woodley Park), and the 2010 classic “Hide_Yo_Kids_Hide_Yo_Wifi” (18th and U).

Two other throwbacks are “snakes_on_a_network” (Adams Morgan) and “More Cowbell” (Foggy Bottom), a reference to a classic Will Ferrell Saturday Night Live bit. I’m also going to guess that “Jwoww” (Columbia Heights) was a choice made in 2009 or 2010.

Animals are also a big thing. At Tynan in Columbia Heights, you can try tapping into “honeybunny,” “Sleeping Bear” or “doggilove.” I’ve never heard of a “crabdawg,” but apparently someone living near Dos Gringos in Mt. Pleasant has.

I’m not religious, but I was impressed with “Jesus is Watching You Do That” at The Coffee Bar in Shaw.  Though “GirlsGoneWireless” was a more enticing option.

As you’d expect, downtown D.C. has the most boring WiFi names. And some people, including Craig of “Craig’s WiFi Network” (Logan Circle) opt for the literal route. I’m sure he has his reasons.

What’s your favorite network name? Do you know Craig?