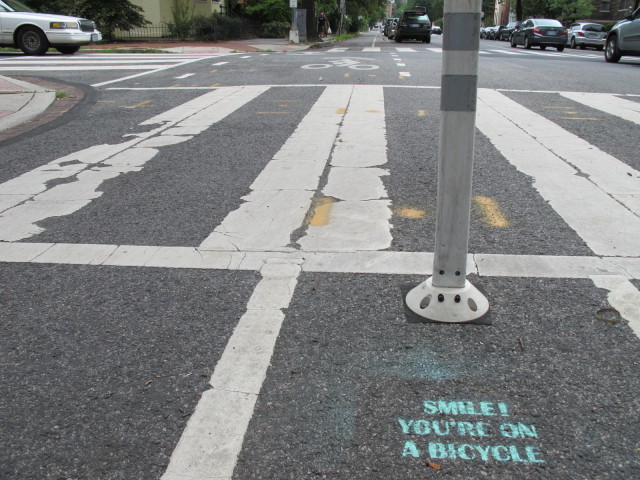 I know you’ve updated readers about the 15th street bike lane in the past. I’m wondering if you can pose a question of alternative routes/how to deal with the upcoming construction that is scheduled to take about 4 weeks starting this Friday. Don’t get me wrong, I’m thrilled that they are repairing the bike lane but will be scrambling for another route to get to work. Possible routes include 14th and 13th streets where 14th street has lanes but with the buses it can be dangerous and 13th street doesn’t have a bike lane at all.”

“The District Department of Transportation (DDOT) will be temporarily restricting the parking lane on the west side of 15th Street NW, from K Street to Swann Street, to repave the 15th Street Cycletrack. While the cycletrack is being repaved, bicyclists are advised to use alternate routes, such as 14th Street and 16th Street NW.

The temporary parking restrictions are scheduled to begin on or about Friday, September 6, 2013 and continue through Friday, October 11, 2013, weather permitting.

The project is scheduled to be completed in several phases. The first phase—which will involve repairs to curbs, gutters, and pedestrian ramps along the corridor—will take approximately two weeks to complete and affect two-block segments at a time. During this phase, temporary No Parking signs will be posted in advance along the affected segments so that residents have adequate notice to move their cars to another location.

The next phases of the project—which involve resurfacing the 15th Street Cycletrack, installation of pavement markings—will be done in two, larger segments. During these phases, DDOT will also provide advanced notice via temporary No Parking signs.”

What are some good alternate routes while the 15th Street cycle track gets repaved?