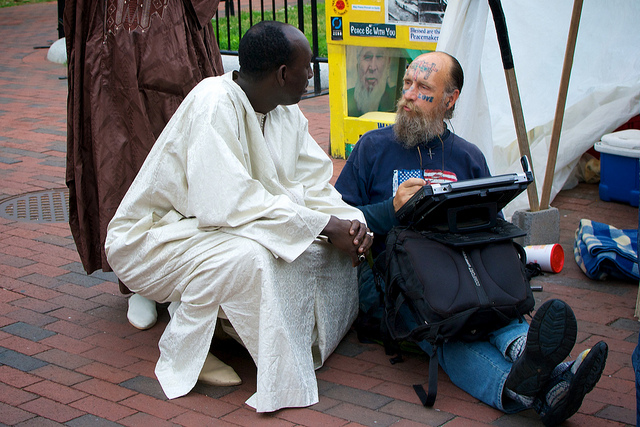 Thanks to a reader for sending from National Journal:

“Anyone who’s ever walked or rode a bike by the White House on Pennsylvania Avenue has noticed an addition to Lafayette Park that city designers hadn’t envisioned: a small tent, sandwiched between two yellow signs calling for an end to nuclear proliferation.

Congresswoman Eleanor Holmes Norton (D-DC) today had staff call the U.S. Park Police after learning that Concepcion Picciotto’s peace vigil was removed from its location in front of the White House last night. Following the call from Norton’s office, the Park Police agreed to the return of the vigil, and Picciotto was informed where it had been taken and how to get access to get it, and supporters have taken her to retrieve her belongings. The vigil, which has stood in front of the White House for more than 30 years, was removed under Park Service rules, when left unattended last night or early this morning by an activist who was to remain with the vigil for Picciotto.

“I appreciate that the Park Police have worked with us to defuse a growing controversy about the removal of Concepcion Picciotto’s belongings,” said Norton. “She is well known for her willingness to engage in principled activism at considerable personal costs. She and her friends and allies have abided by the rules, and this single mishap by a fellow activist should not torpedo her longstanding vigil. In this city, we work together to find solutions.”