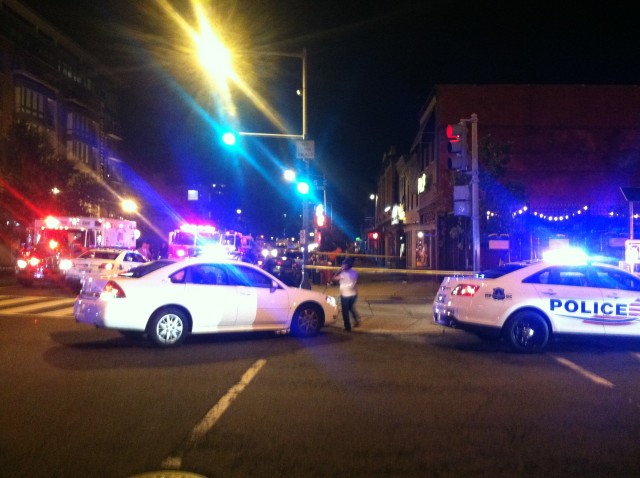 An update from MPD on last night’s shooting in Logan Circle:

“At approximately 8:50 PM, a shooting occurred in the 1300 block of Riggs Street, N.W. Several shots were fired by an unidentified suspect, and one adult male victim was struck in the right hip. The victim fled from his assailant, and was found suffering from a single gunshot wound in the 1800 block of 14th Street, N.W. The victim is being treated at a local area hospital. One of the bullets fired by the suspect struck a vehicle that was driving northbound on 14th Street. Another bullet struck a parked car in the 1300 block of Riggs Street. A third bullet struck the window of a business establishment in the 1700 block of 14th Street, N.W. Fortunately, there were no injuries resulting from these stray bullets. The suspect involved in this shooting was observed by witnesses fleeing southbound on 14 Street, N.W.

At this time, the investigation is continuing. Anyone with information regarding this crime is urged to call 202-727-9099. Thank you for your assistance!”

Ed. Note: I’m told the business that was hit with a stray bullet was Batch 13.

Read more →
More Stories
Friday Question of the Day – Is Target a Good Fit for Former ESPN Zone Space Downtown?Shooting in Eckington Around 9am