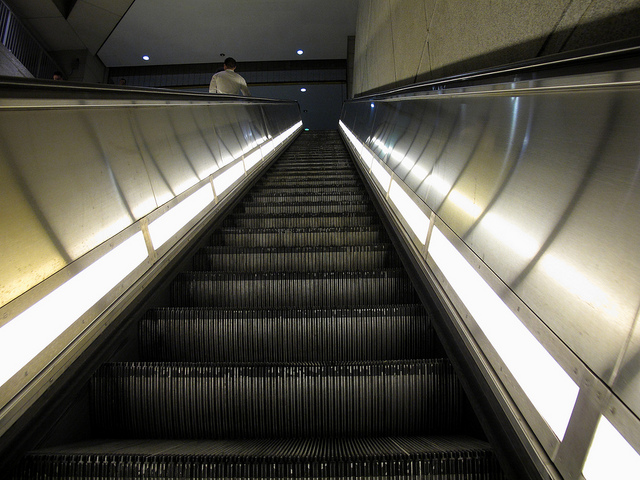 “More Metro escalators are in service and available for riders than at any point in nearly five years, the Authority will report Thursday in its Vital Signs presentation to the Board of Directors. The improvement is largely attributable to the major “Metro Forward” rehabilitation effort that has been underway for more than two years.

“This is what Metro Forward is all about: delivering more reliable service and significantly improved escalator availablity our riders,” said Metro General Manager Richard Sarles.

For the 2nd quarter of the year (April through June), Metro achieved an availability score of 91.9 percent — meaning that more than nine of every ten of the system’s 588 escalators were in service during operating hours.

Metro has taken a number of steps to improve the safety and reliability of its escalator fleet, which is the largest of any transit agency in North America and includes the longest escalators in the Western Hemisphere. Specifically:
• 89 escalators have been rehabilitated since 2011, a process that replaces the motor, steps, control system, handrails, drive chain and all other major parts resulting in a “like new” unit.
• 18 new escalator mechanics were hired this fiscal year to ensure that preventive maintenance is done on schedule.
• 97 percent of preventive maintenance was completed on time in the second quarter, as compared to 90 percent in Q2-2012 and 40 percent in Q2-2011.
• Strategic use of contractor services to augment in-house staff and achieve faster response times.
• Increased use of remote monitoring technology.

Within months, Metro will begin full replacement of an additional 128 escalators across the system. Already, Metro has fully replaced six escalators under the Metro Forward rebuilding program, and three more units are currently being installed at Pentagon Station.”