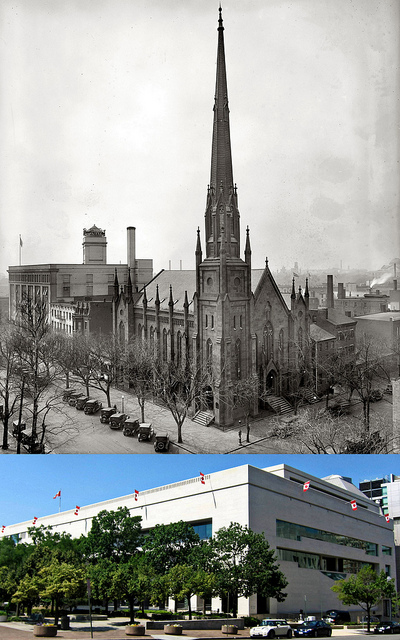 “The top photo is Metropolitan Methodist Church, ca 1924, taken by the National Photo Company. (via shorpy) The bottom photo is the Embassy of Canada, ca 2010.

Facing southwest at the corner of C Street NW and John Marshall Park (where 4th Street would normally intersect) in the Judiciary Square neighborhood of Washington, D.C. The street on the left in the older photo was called John Marshall Place (also called 4 1/2 Street), but that no longer exists.

Construction of Metropolitan Methodist Church (the current church building is located on Nebraska Avenue NW) began in 1854, but due to the Civil War, wasn’t completed until 1869. The building was designed by the New York architectural firm Mundell & Teckritz. The 240-foot steeple wasn’t finished until 1872, although it was torn down in 1935; the rest of the church building was demolished in 1956.

The postmodern Canadian embassy was completed in 1989 to the designs of architect Arthur Erickson.”