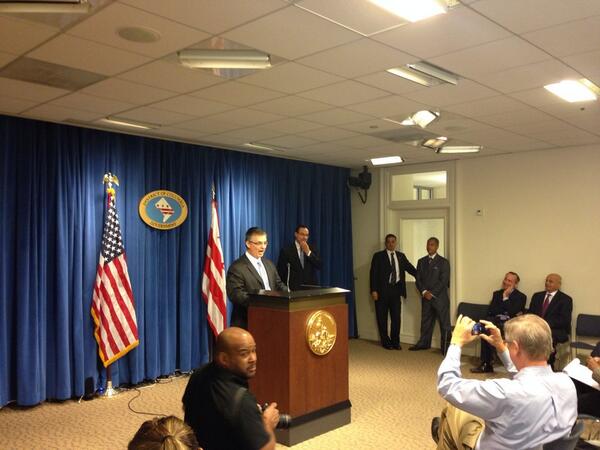 “After an exhaustive nationwide search, I believe we have found in Jeff DeWitt everything I’m looking for in a new Chief Financial Officer for the District,” said Mayor Gray. “He has a sterling track record in municipal finance. He has extensive experience in working with the Wall Street credit-rating agencies to maintain and improve a large city’s bond ratings. He is a skilled manager and leader. And he has proven experience working collaboratively with the executive and legislative branches of government to ensure that residents are served well and served fairly.”

DeWitt will replace Dr. Natwar M. Gandhi, who is stepping down after more than a decade as the District’s Chief Financial Officer (CFO).

“The District has come a very long way in managing our finances since the dark days of the Control Board, and I am confident that Jeff DeWitt will be able to continue on that trajectory, ensuring that our financial house stays in top working order,” said Williams. “He has my full support.”

Dr. Rivlin praised DeWitt’s extensive management experience. “For decades, Jeff DeWitt has managed not only complex financial transactions but also people and projects, ensuring that Phoenix’s financial management is among the most outstanding of any large city in the country,” she said.

“I’ve devoted most of my career to public service, and I’m deeply honored to begin serving the people of the nation’s capital,” DeWitt said. “The District of Columbia is not only nationally prominent, but also a huge fiscal success story in the recent past. I look forward to continuing and building on that legacy.”

DeWitt has worked in the Phoenix Finance Department since 1994, serving in several positions before becoming CFO. He has managed the finances of a city with a $3.4 billion annual budget, nearly 15,000 employees, a $7 billion debt portfolio, and more than $2 billion in investments. Under his leadership, Phoenix has been able to increase and maintain a AAA credit rating despite uncertain market conditions and a significant downturn that had an especially significant impact on the Phoenix area’s economy and housing market. In addition to oversight of municipal finances, DeWitt has been charged with technology, procurement and capital oversight. He has directed a complete systems overhaul for the Phoenix Finance Department even while dealing with cuts in financial and human resources.

Prior to his work at the Phoenix Finance Department, DeWitt served as a Resource Specialist and Economic Analyst for the Phoenix Water Services Department, as a Research Associate for an Illinois consulting firm, and as a U.S. Army officer. He earned a bachelor’s degree in geology and earth science from Eastern Illinois University in Charleston, Ill.; and a master’s degree in water resource management with an emphasis on economics from Southern Illinois University in Carbondale, Ill.

He is a member of the Government Financial Officers Association, board president for the Long-Term Disability and Self-Insurance Trust, board treasurer for the Downtown Phoenix Hotel Corporation and a member of the board of the Phoenix Community Development Investment Corporation. Among his other volunteer activities, he has served as a coach for girls’ and women’s fast-pitch softball teams.”