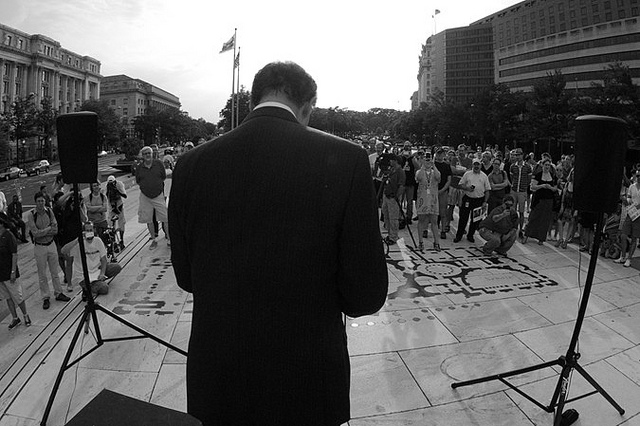 “My administration has worked aggressively to strengthen the District’s economy and bring down the unemployment rate,” said Mayor Gray. “We’ve helped spur the creation of 23,700 new private-sector jobs. But our growth is being hampered by sequestration’s elimination of federal jobs, grants and revenue. We are calling on Congress to end sequestration and balance the budget responsibly.”

The revenue impact to the District of Columbia from federal sequestration and the loss of federal grants and payments is deeply concerning, according to officials. The Office of the Chief Financial Officer predicts that sequestration could take approximately $60 million in revenue from the District’s economy in Fiscal Year 2014.

In addition, the District is currently projected to lose approximately $30 million of federal grants and payments in Fiscal Year 2014. Some of the most significant cuts are $11 million to the D.C. Housing Authority and $6.3 million to the Office of the State Superintendent of Education. These cuts may result in the loss of 200-250 housing vouchers for needy families and the reduction in grants to public schools for special education, free and reduced-price lunches, and early-childhood education.

District job initiatives such as the One City ● One Hire program have steadily reduced the city’s unemployment rate from its peak of 10.3 percent in August 2011 to 8.4 percent in December 2012. Under the entire four-year tenure of the previous administration, 11,700 private-sector jobs were created in the District. During the first 2.5 years of the Gray Administration, 23,700 private-sector jobs were created. However, once sequestration set in, federal revenues stopped flowing to the District, federal jobs were eliminated, and by July 2013, the District’s unemployment rate inched up to 8.6 percent.

“The loss of federal government jobs has flattened the District’s job growth, said Director Mallory. “But, we have proactively created strategies to do our best to mitigate the negative impacts of sequestration. And if not for our ongoing efforts to grow private sector employment, the unemployment picture would be far worse than it is now.”

Building upon the District’s Five-Year Economic Development Strategy, Deputy Mayor Hoskins emphasized that 71,000 jobs will be created or filled by the end of 2017 as a result of several hotel, office and residential projects; incentive programs; and other job-creating initiatives. He also revealed plans to provide job training and job creation strategies for key employment sectors, including technology, hospitality and the medical field.

“We are doing everything in our power to keep the District on the right path to job growth and a more sustainable economy,” said Deputy Mayor Hoskins. “But we can’t do this alone.”