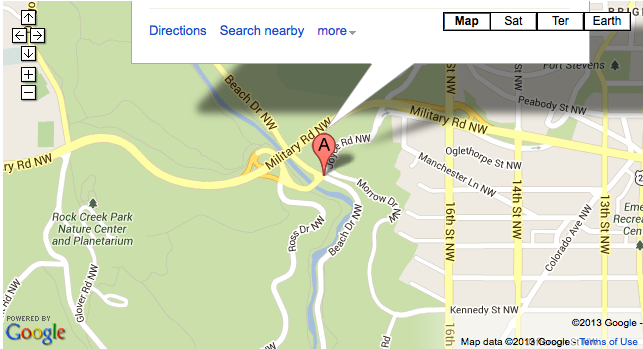 “Units are conducting a death investigation of a deceased male subject found in a wooded area in Rock Creek Park near Beach Drive and Joyce Road. Detectives from the Homicide Branch are conducting the investigation. Anyone with information is asked to call 202-727-9099.”

“Detectives from the Metropolitan Police Department’s Homicide Branch are investigating a fatal stabbing which occurred in Rock Creek Park at Beach Drive and Joyce Road, NW.

On Monday, September 2, 2013 at approximately 7:53 pm, members of the United States Park Police were notified of a body found on the bank of Rock Creek in Grove #6 near Beach Drive and Joyce Road, NW. They located an unconscious adult male suffering from apparent stab wounds. DC Fire and Emergency Medical Services personnel responded to the scene to initiate life saving measures, but found no signs consistent with life. The remains of the decedent were transported to the Office of the Chief Medical Examiner pending an autopsy and a determination of a cause and manner of death.

The identity of the decedent in this case is being withheld pending next-of-kin notification.”

END_OF_DOCUMENT_TOKEN_TO_BE_REPLACED

More Stories
KBC Adding a Second Floor in Columbia HeightsPoP Preview – Bar Charley Opening Thursday at 1825 18th Street, NW – Have a Look Inside and at the Menu