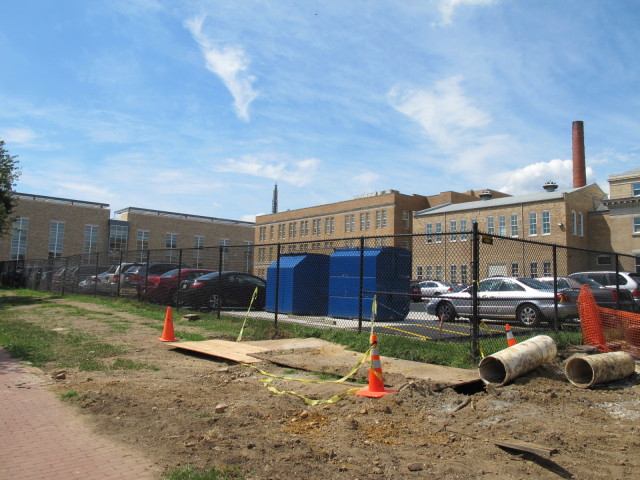 “I am writing regarding a neighborhood issue for Truxton Circle. In short, there is lot that used to be a multi-acre field at the corner of 1st and P St NW that was paved over practically in the middle of the night and without proper permits. What makes this interesting is the back story as this story crosses some important themes in the city today:

The field is owned by CAPCS Amos-III, a practically failing Charter School (7% of the students proficient in Math, 24% of the students proficient in Reading http://www.zillow.com/washington-dc/schools/community-academy-pcs-amos-iii-7654/ ). The field was covered over 4 years to accommodate parking for the staff, and more importantly, for the parishioners of the Metropolitan Baptist Church who were supposed to be meeting there for two years while the church completes the building of its new facility in Prince George’s County. Construction of the new church faltered and Metropolitan seems to have taken up permanent residence at CAPCS.

Recently, as the new Dunbar High School neared completion, Pepco started working on installing new fiber optic cables underground at First and P. Under cover of the Pepco construction activity, CAPCS has apparently hired Ft. Myers Construction Company to clear the gravel and install a permanent black top surface. CAPCS did this without the community input or approval, and as far as is known, without the approval of the DC EPA. The reason that approval is needed for something like this is that a large multi-acre field turned paved parking lot pushes significant runoff water into the local sewer system instead of being absorbed by the ground. For an area like Truxton and Bloomingdale that alraedy has issues with flooding in storms, the fact that parking lot was paved without proper approval is staggering.

More amazingly, after the fact, it is revealed that the new ANC5C Commissioner knew about the potential paving of the lot, never brought up the concern with the community, and claimed that it was a good faith effort to help with the neighborhood parking nightmare during the week of the Dunbar opening (and beyond). http://batesareacivicassociation.org/2013/08/18/anc-commissioner-and-city-officials-knew-of-parking-lot-construction/

However, the Metropolitan Baptist Church sent out an email claiming that the parking lot was built for the benefit of the church.

Was Parking Lot Built for the Neighborhood or for the Church?

CAPCS has been trying for the last two years to get the community to approve of the paving of the former green space primarily to accommodate the needs of Metropolitan Baptist Church and whatever other commercial aspirations may be afoot were stunned. The reality is that in the planning of the Dunbar Grand Opening, Amos offered to pave the lot and to provide 50 spaces for attendees to this week’s festivities. The question we must all ask ourselves is: Is the Dunbar Grand Opening the reason or the cover for the paving?

A bigger question is the decision that charter schools like AMOS is making. Most city schools do not have space for a grass field for the children to play during recess or for after school activities. AMOS – III does, but instead of providing a needed service for the kids and the community, it would rather do a backdoor deal with the church to making parking for residents from MD. It are back door deals like these that aid failing schools to stay afloat even though they cannot fill their classrooms.

The Bates Area Civic Association is having a meeting regarding the parking lot issue on Monday, September 16th 7pm at Mt. Sinai Church (3rd and Q St NW). Come to the meeting if you are interested in voicing your opinion about this matter.”