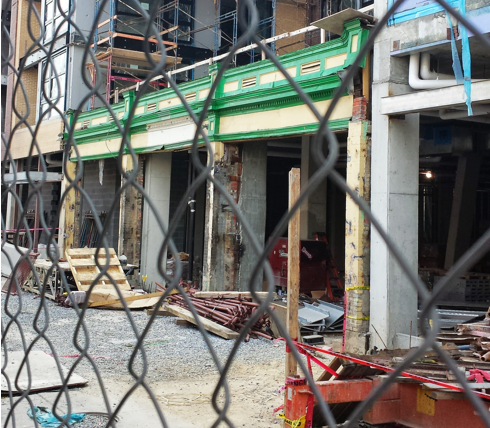 A few days ago you posted about the significant preservation effort that is built into the large development at 6th and K. I’m often pleased by the fact that many historic buildings and facades are preserved as a part of new developments, and amazed at the efforts they undertake. But sometimes, like in the case of The Louis building at 14th and U, I’m just left bewildered.

The extent of the “preservation” seems to be just the facade of an older single story building, and not all that interesting a facade at that. How/why does this happen? Is the developer given an incentive to keep such a “structure”? Surely they can re-recreate something like what the photo shows them to be preserving – it’s just a front with some trim… What’s the deal with these preservations?”

Ed. Note: This is the facade of the former El Paraiso restaurant which closed in July 2011. The surrounding buildings were demolished in May 2012.