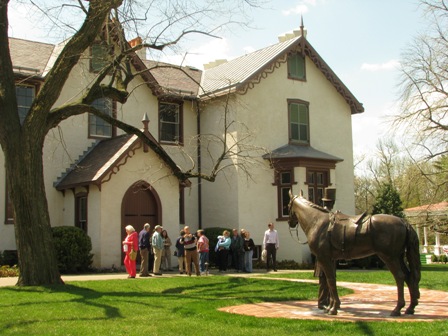 “The original Civil War diary and personal artifacts of Albert Nelson See, a member of Abraham Lincoln’s Presidential Guard, will go on public display for the first time in history at President Lincoln’s Cottage this autumn. See’s eye-witness accounts detail President Lincoln’s life at the Cottage, Jubal Early’s attack on Washington at Fort Stevens, and the inner workings of the presidential guard. Visitors to the exhibit will discover an authentic perspective of Civil War life in Washington. The exhibit opens to the public on September 26th 2013 in the Robert H. Smith Visitor Education Center at President Lincoln’s Cottage, and will remain on display until December 31st, 2013 [UPSHUR ST AT ROCK CREEK CHURCH RD, NW].

“When President Lincoln and his family resided at the Soldiers’ Home, they moved closer to the action of the Civil War,” says Erin Carlson Mast, Executive Director of President Lincoln’s Cottage. “From greeting wounded soldiers en route to Harewood Hospital, to witnessing growing numbers of contraband camps and military burials, Lincoln’s life at the Soldiers’ Home connected him profoundly to the stark realities of the Civil War. As a member of his presidential guard, See lived on the Soldiers’ Home grounds and bore witness to the Lincoln family’s daily life, as well as Civil War events such as the battle at Fort Stevens in the summer of 1864. Lincoln himself left only a few written records of his life at the Soldiers’ Home, and See’s narrative offers an invaluable window into that period.”

The Albert Nelson See Diary was a gift to President Lincoln’s Cottage from Ms. Betty Kessler, the great granddaughter of Albert Nelson See. Having been passed down through several generations of the See family before being donated to President Lincoln’s Cottage in December of 2009, the diary underwent significant conservation efforts. It is now being displayed to the public for the first time.”