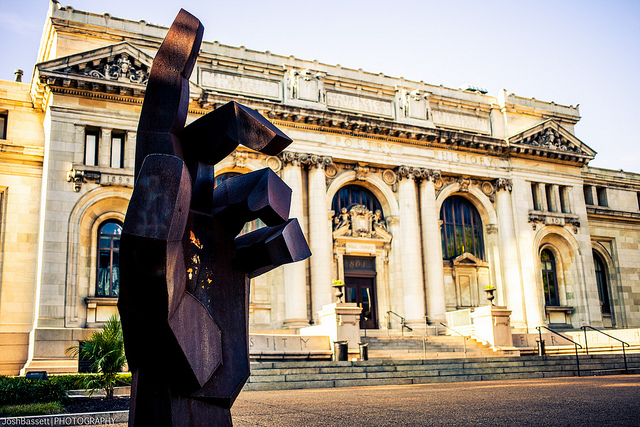 Whoa this could be huge for Mt. Vernon Square. From a press release:

“Events DC, the official convention and sports authority of the District of Columbia, and the Malrite Company, the Cleveland-based owner of the International Spy Museum (SPY), announced today the proposed redevelopment of Mt. Vernon Square, including the relocation of SPY from its current location at 800 F Street, NW, to the historic Carnegie Library. The project, with Events DC and Malrite as co-developers, would add 58,000 square feet of new space to the Library, create a state-of-the-art Visitors Center, and consolidate and renovate the Historical Society of Washington’s galleries and offices, while bringing a variety of community amenities to one of the capital city’s original green spaces.

The proposed development includes 40,000-square-feet of new underground space below the Library for SPY, creating large flexible exhibit areas for the Museum. The interior of the Library would be renovated to enhance special event uses for both Events DC and SPY, and the addition of a sculpted glass pavilion on the north side of the Library would house the Visitors Center, a new café, and the Museum’s retail store. Proposed site improvements to the Mt. Vernon Square grounds include outdoor seating, a small amphitheater and a playground to create various programming options and other green space public amenities.

“We are excited about the possibility of relocating the International Spy Museum to the Carnegie Library at Mt. Vernon Square,” said Mayor Vincent C. Gray. “I applaud Events DC and the Malrite Company for developing a public-private partnership that will revive and preserve this important historic asset while also strengthening the District of Columbia’s travel and tourism industry.”

The plan also calls for the retrofit of existing space for the Historical Society, inclusive of a new gallery, office and collections storage space and a modern research library. As part of the redevelopment project, Events DC, which owns and operates the adjacent Walter E. Washington Convention Center, will design and program a visitors’ information center in the new addition, and will also host special events in the building’s public areas.

“With Mt. Vernon Square at the Convention Center’s doorstep, each of these proposed uses are perfect complements to our mission of creating economic and community benefits for the District of Columbia,” said Gregory A. O’Dell, president and chief executive officer of Events DC. “Given the rapid pace of growth in the immediate area, including CityCenter DC and the Washington Marriott Marquis, we envision this project becoming the northern anchor of a conventions and entertainment district that will stretch all the way down to Pennsylvania Avenue.”

As part of the proposal, The Maltz Family, owners of the Malrite Company, would gift SPY to the community as a 501(c)(3) nonprofit, and upon the project’s completion, Events DC would continue to maintain and operate the Library and the grounds, with SPY as the primary tenant of the building.

“As a Navy veteran, I, along with my wife, Tamar, take pride in donating the International Spy Museum to our community here in the nation’s capital,” said Milton Maltz, founder of The Malrite Company and SPY. “Tamar and I are both children of immigrants, and we believe that this Museum represents our history. Wars have historically been won or lost because of intelligence, and this Museum enlightens the American public of the activities conducted by the brave men and women who serve in the various intelligence agencies.”

Redevelopment plans for Mt. Vernon Square, formally known as Reservation 8, and the Carnegie Library will undergo an extensive review process with various federal and local agencies. Once approved, groundbreaking would occur in 2015 with a grand opening in January 2017.

In 2011, Events DC assumed administrative control of the Carnegie Library, including the remaining 88 years on the Historical Society’s lease, from the District government. Following the redevelopment, HSW will maintain its headquarters at the Library, where it will operate its renowned Kiplinger Research Library. The Society will also present exhibits and other programs in its new space.

“The Historical Society is delighted to partner with Events DC and SPY in this transformational venture,” said Julie Koczela, Chair of the Society’s Board of Trustees. “Together we will provide a unique opportunity to explore the city’s history with residents and visitors in this gateway to some of the city’s most popular destinations.”

The International Spy Museum would remain open at its F Street location until the project is complete. Its latest interactive exhibition, “Exquisitely Evil: 50 Years of Bond Villains,” celebrating the 50th anniversary of the James Bond film franchise and dedicated to his most memorable adversaries, opened in November 2012 and has been a phenomenal draw for new and returning visitors.”

Read more →
More Stories
“This Card may be used only in the U.S. and District of Columbia”Weekend Crime Reports and Updates