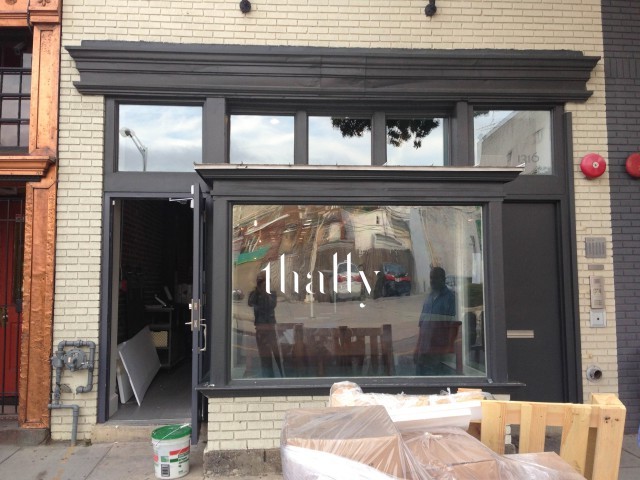 “Bringing new flavor to 9th St. NW in the Shaw neighborhood of Washington, DC, Thally serves Modern American Cuisine created by Chef and Co-Owner Ron Tanaka, along with a rotating list of wines and craft beers, custom cocktails, housemade sodas, and unique spirits in a 70 seat restaurant which includes a 14 seat bar. The restaurant hopes to open on or about Tuesday, August 27th.

Thally is the brainchild of two good friends who have been talking about opening up their own casually elegant restaurant in Washington, DC for years. Chef & Co-Owner Ron Tanaka and General Manager & Co-Owner Sherman Outhuok finally found the perfect place, on a burgeoning block of 9th St. NW near the DC Convention Center, and Thally was born. Thally was conceived to be a comfortable and inviting neighborhood restaurant, as well as a destination worthy of Washingtonians crossing the city to discover our mouthwatering cuisine.

Our name pays tribute to our Shaw neighborhood as well as our families: “Thally” refers to the Tally-Ho Stables (built in 1883) located in Naylor Court directly behind our restaurant, as well as to Thalia, Sherman’s daughter. (Thally is pronounced without saying the “h”, as in Tally-Ho.) The interior décor also reflects the character of Thally’s surrounding neighborhood. Design details include: exposed brick, reclaimed wood, vintage barn-door hardware, blackboards, antique pipe fittings, leather seating, substantial wood and steel tables, and a 28 ft. absolute black granite bar with leather-finish. Our logo and the custom wall graphics created by local graphic designer/ artist Matthew Hlubny for Thally’s dining rooms and bathrooms feature images of the antique stables, row-houses and carriage houses that are characteristic of the Blagden Alley-Naylor Court designated historic district in the Shaw neighborhood, contained between O and M Streets and 9th and 10th Streets.”

MENU after the jump.

Simple, Fresh, and Flavorful… all of Thally’s dinner dishes have been carefully created by Chef Ron Tanaka with those three words in mind.

DRAFT BEER: Our bar has 10 craft beers on draft.

DRAFT CIDER: We’re cider fans, and will always have 2 ciders on tap and a few by the bottle.

HOUSEMADE SODAS: In lieu of serving traditional sodas squirted from a soda gun, Thally will be making its own sodas and colas.

A native of San Diego, Chef Tanaka began his culinary career in the mid 90s when he came to DC and began working in the pantry of the Morrison-Clark Inn under the tutelage of Susan McCreight-Lindeborge, who was a great inspiration to him. He was then spirited away by well-known Michel Richard who hired Tanaka as a line cook when he opened Citronelle. He continued to refine his cooking talents and techniques while working for Frank Ruta at Palena and then Eric Ziebold at CityZen. When Cork opened on 14th St NW, Tanaka was hired as Executive Chef, putting the restaurant (and himself) on DC’s culinary map. Excited for new adventures, Chef Tanaka left Cork to reinvigorate New Heights in Woodley Park, quickly making it a must –go dining destination, and earning it accolades on Washingtonian’s “2012 Very Best Restaurants” List. He is excited to now open his own restaurant which dedicates itself to Simple, Fresh, and Flavorful Modern American cuisine.

A longtime fixture on DC’s bar scene, Sherman Outhuok was a managing partner for a number of years at Posto restaurant on 14thSt. He then went on to open Maple in Columbia Heights as the Bar Manager /AGM. He makes his own “Cello” (sweet and citrusy) liquors, inspired from his time at Posto. You’ll regularly find Outhuok behind the bar mixing up new batches of Lemon, Tangerine, Orange and even Grapefruit Cello. You’ll also see him front-of-house, greeting guests.

With more than 20 years of experience in Washington, DC, as well as substantial culinary work throughout Italy, London, and New York, Paolo Sacco is highly regarded as a dynamic leader in the restaurant and hospitality industry. He is the well-known and admired Owner of Ristorante Tosca, Co-Owner of Posto, and now a Co-Owner of Thally. Sacco’s hard work, dedication, and mission to always provide the highest quality cuisine and service to his patrons have placed him among the elite of Washington’s restaurateurs. Sacco’s career in DC began when he became the maitre d’ at the very trendy Bice Restaurant from 1993-1995, where he was responsible for the operation of the dining room, as well as creating unique menus with the chef. Since its opening in April 2001, Ristorante Tosca has firmly established itself as a mature player and premier Italian restaurant on the Washington restaurant scene. Sacco’s trattoria-style restaurant, Posto, has followed that same path – albeit on a more casual level, as it is quickly became a cornerstone on 14th St.’s restaurant row. With Sacco’s guidance, Thally is poised to lead the charge in making 9th St. NW a culinary destination.

Thally is located in the newly thriving 9th St. Corridor in Shaw, immediately adjacent to Seasonal Pantry and A&D Neighborhood Bar, in the middle of the block between N and O Streets NW.

Thanks to Erica for sending yesterday “Spotted what I believe is a Peregrine Falcon on the Mall this afternoon. It was in the garden next to the Arts & Industries…

Thanks to Nancy for sending “photographs taken after the disaster at 18th & Columbia by neighborhood news photographer at the time Hugh Miller” From a press release: “Neighbors for the…

Read more →
metro, What the Helen of Troy is This

Thanks to Steve for sending yesterday from Columbia Heights: “neat to see that the metro money train is still running, given all the train issues the last few months.”