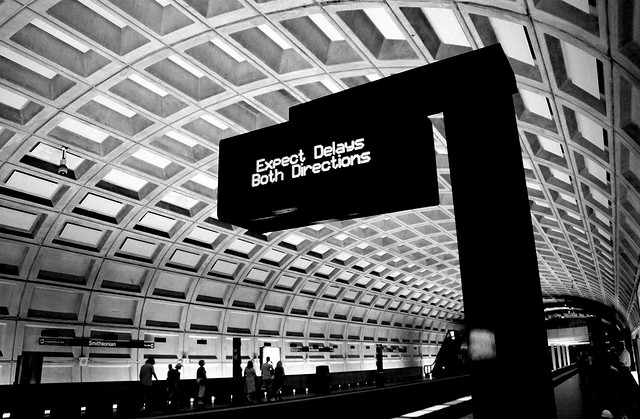 “Metro is advising Red Line riders of a major service disruption that will impact service Friday, August 30, due to an overnight derailment of a non-revenue train between Rhode Island Avenue and Brookland stations.

• There is no Red Line train service between Fort Totten and NoMa-Gallaudet stations until further notice. Customers are advised to avoid the eastern side of the Red Line if possible.
• Riders may experience longer waits for trains and increased crowding on the Red Line today.
• Between Shady Grove and NoMa-Gallaudet, trains will operate every 5 to 10 minutes during the morning rush hour.
• Between Glenmont and Fort Totten, trains will operate every 10 to 15 minutes during the morning rush hour.
• Riders are strongly encouraged to use the Green Line as an alternate route between Fort Totten and Gallery Place (Downtown DC). Passengers arriving via Red Line trains at Fort Totten should transfer to Green Line trains on the lower level.
• Limited shuttle bus service will be available between Fort Totten, Brookland, Rhode Island Ave and NoMa-Gallaudet stations. Passengers using shuttle bus service should expect significantly longer travel times.
• Regular route Metrobus service may be an option for some riders. To check, use Metro’s Trip Planner and select the “bus only” option.

The derailment occurred around midnight as the system was closing. The train involved was being moved from one rail yard to another. It was not carrying passengers, and there were no injuries.

The incident caused damage to track equipment in the area of Rhode Island Station, including the third rail, signal cables and track components.

Metro personnel are working to restore normal service as quickly and safely as possible. However, at this time there is no estimate on when normal service will be restored. The area where the derailment occurred is scheduled to be out of service starting at 10 p.m. Friday, through the Labor Day weekend, for rebuilding work.

The cause of the derailment is under investigation.”