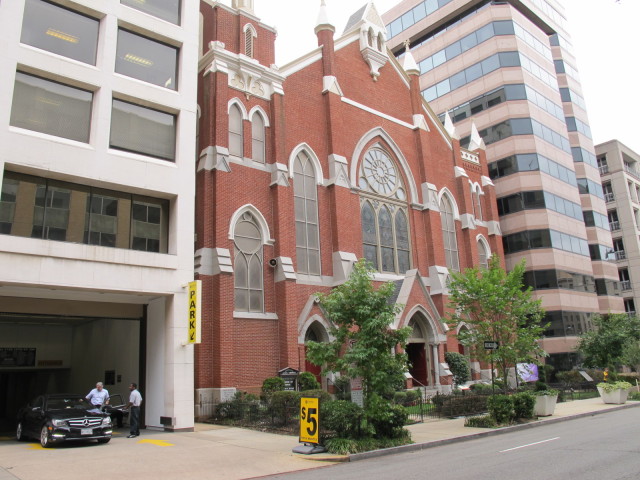 Last week we learned the M Street Cycle Track would finally get installed in October. A few readers have wrote in asking if we could discuss the controversy surrounding the gap in front of the AME Metropolitan Church between 15th and 16th St, NW. WAMU reported:

“The church complained the original design for a cycle track separated from traffic with bollards would eliminate much-needed parking as well as a travel lane for vehicles attempting to get to the church for any of its well-attended events. The new design restores the parking spaces and travel lane by removing protective bollards from the cycle track, turning it into a regular bike lane adjacent to traffic.”

“Certainly DDOT could also have pushed to remove parking instead. Zimbabwe explained that the church was initially entirely opposed to any sort of bike lane, and by engaging with church leaders and members over the last few months, that position has softened. Plus, any bike lane is today just an abstract notion; when a real bike lane is in the ground, Zimbabwe thinks all parties may think a little differently about the issue.”