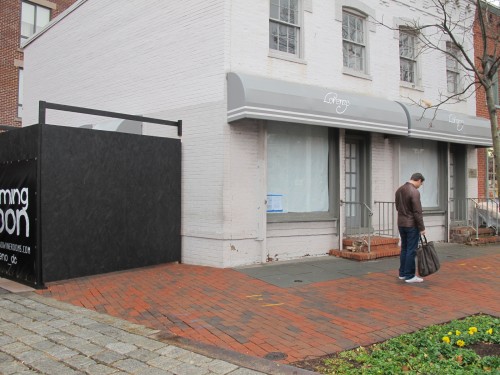 Back in Dec. 2012 we learned Eno Wine Bar was opening up next to the Four Season’s Hotel at 2810 Pennsylvania Ave, NW. A press release updates us with a planned September opening:

“ENO, a new neighborhood wine bar with a focus on exceptional wines in an approachable setting is slated for a September opening at 2800 Pennsylvania Avenue, NW in Georgetown. With five locations, including two in Chicago, one each in San Francisco, San Diego, and Half Moon Bay, CA, ENO Georgetown will mark the company’s sixth wine bar, and first foray on the East Coast, offering guests a curated selection of wines by the glass, bottle and flight, as well as handcrafted cheeses, charcuterie and chocolates from artisanal producers.

Known for its amenable approach as well as its warm and inviting design, ENO’s opening list will offer hundreds of selections from both the Old World and New World; approximately half of the bottles will be priced under $50. The wine bar will also feature 50 wines by the glass, eight on tap, with prices starting at $9.

The growing local wine scene will be well represented in ENO’s offerings, showcasing several Virginia wineries including King Family Vineyards, Paradise Springs Winery and Barboursville Vineyards. ENO’s list will also include a series of private labels made by them from the initial step of barrel selection to the final blend, including two wines made in partnership with Dusted Valley in Walla Walla, Washington – “Columbeaux” and “GSM.”

Flights are a staple of ENO’s offerings, and the Georgetown location will be no exception. The bar will feature 8 to 12 wine trios at any time, as well as flights assembled from the selection of cheeses and chocolates available. ENO’s commitment to supporting local producers on the food front will include charcuterie selections from Stachowski’s Market in DC, chocolate truffles from Virginia confectioner Gearharts and cheeses from Calkins Creamery in Pennsylvania and Cherry Glenn Goat Cheese Co. in Maryland.

Visits from artisanal producers, including local vintners, cheese makers and chocolatiers, will be a regular occurrence at ENO. Dubbed “ENO-versity,” these casual-yet-informative tasting sessions will allow guests to brush up on array of topics from female winemakers to French varietals and give them access to featured partner artisans.”