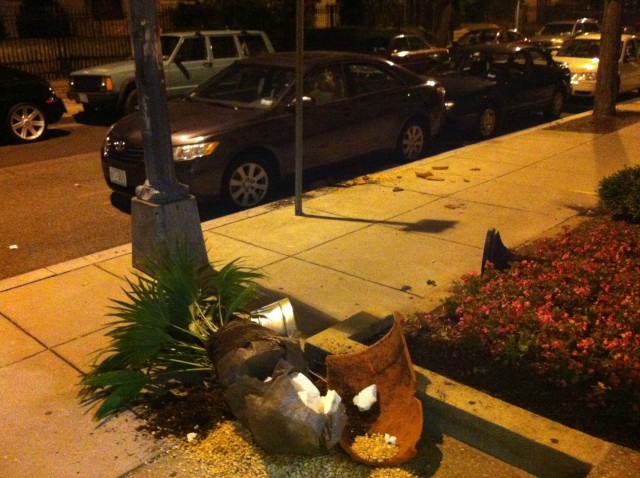 Around 2AM Saturday the entire 1600 block of Fuller street was awakened by an unholy racket, banging and clattering that went on a good five minutes or more down on the street. Police arrived in force, and a bicycle cop managed to track down the extremely drunk perpetrator. Apparently the noisy sound (which sounded like an elephant making sweet love to a dumpster) was him knocking over and throwing around a 3-foot concrete planter until it broke into multiple pieces, and then chucking the pieces at the closest parked car. Scuffed up the side all over, but mostly cosmetic damage.

Not the crime of the century, and this street gets a lot of foot traffic since it’s a shortcut rather than going up to 16th and Columbia proper, so we get a lot of littering and sporadic car break-ins, but this one was just odd enough for me to snap a photo.”

END_OF_DOCUMENT_TOKEN_TO_BE_REPLACED

More Stories
From the Forum – Landlord wants to move back into house we are renting – what rights do we have?Mon. Afternoon Rental Option – NE Capitol Hill