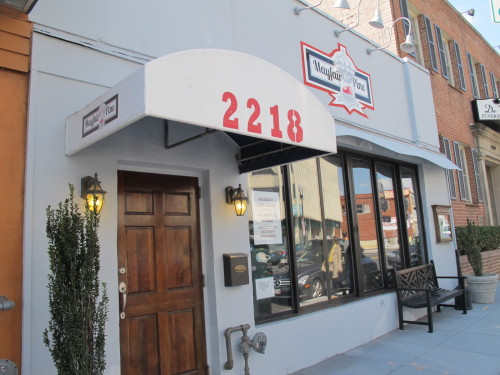 “Following last month’s festive celebration of the third anniversary of its flagship brewpub in Falls Church, Mad Fox Brewing Company announced today that it will expand to Washington, DC, with plans to open a 4,590 square foot taproom at 2218 Wisconsin Avenue, NW in Glover Park. Mad Fox Brewing Company Taproom (Mad Fox Taproom), a 127-seat neighborhood establishment, is slated to open by the end of first quarter 2014, depending on the renovations needed and the permitting process.

“Glover Park is a wonderful neighborhood that deserves a great beer bar like the Mad Fox Taproom,” said Mad Fox CEO and Executive Brewer Bill Madden. Mad Fox has been searching for a location in the Nation’s Capital for the past 20 months, scouting out 27 neighborhoods throughout the District. “Glover Park offers an ideal fit for our concept and shares similarities with Falls Church in its demographics and overall environment. And just like in Falls Church, we look forward to becoming an active and positive member of the community, contributing to both the economy and the culinary options of the area.”

The Mad Fox Taproom will showcase its award-winning handcrafted beers with draught and English-style cask service, with up to 24 draught and cask options. Diners can expect a full menu with appetizers, sandwiches, burgers, salads and small plates.

“All of the beers will be brewed in Falls Church in our 15-barrel brewery. We have plenty of capacity in our brewery and we’ll be able to serve all of our Falls Church fans, wholesale clients and the Glover Park taproom without any compromises.” Madden said. “Though the spotlight will be on our beers, our food is a key part of our concept and will help the taproom evoke a brewpub environment.”

Opening in Washington, DC has been part of the business model ever since Madden and business partner Rick Garvin formulated the Mad Fox concept in 2007. Though the pair eventually settled on Falls Church as its home base, Madden has experience expanding brewing concepts in the region. He served as Executive Brewer at Capitol City Brewing Company where he helped grow from one to five locations during his 10-year tenure.

Madden hopes to have the details finalized in time to take possession of the property in September. Assuming permits and renovation go briskly, the Mad Fox Taproom could be open as early as first quarter 2014.

“Building upon the success of our Falls Church location, we fully expect the Mad Fox Taproom to become a Glover Park destination, with craft beer lovers from all over DC coming to taste our beers.” Madden said. “I’m a big believer in ‘a rising tide lifts all boats,’ and I expect other Glover Park businesses to benefit from our presence, like they have in Falls Church. I can’t wait to bring the Mad Fox atmosphere and experience to the iconic city of Washington, DC.”

Additionally, the Falls Church brewpub remains active within the community and proudly sponsors many civic events, local festivals and business activities. A leader in the craft beer field, Mad Fox beers are featured at Nationals Park and eleven of the best craft beer bars in DC, and this week is a sponsor of DC Beer Week.

Not just a spot for beer connoisseurs, the cuisine at the Mad Fox Falls Church location has received critical acclaim as well. The brewery features a seasonal menu with items made in house from scratch—Executive Chef Andrew Dixon prides himself on using locally sourced produce, meats, cheeses and other farm fresh ingredients.”